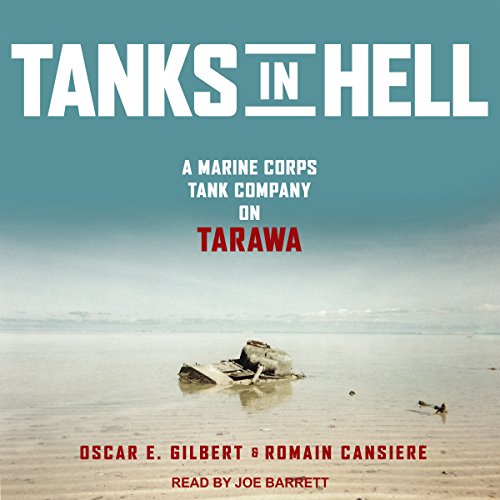 In May 1943, a self-described "really young, green, ignorant lieutenant" assumed command of a new US Marine Corps company. His even younger enlisted Marines were learning to use an untested weapon, the M4A2 "Sherman" medium tank. His sole combat veteran was the company bugler, who had salvaged his dress cap and battered horn from a sinking aircraft carrier. Just six months later, the company would be thrown into one of the ghastliest battles of World War II.

On November 20, 1943, the 2nd Marine Division launched the first amphibious assault of the Pacific War, directly into the teeth of powerful Japanese defenses on Tarawa. In that blood-soaked invasion, a single company of Sherman tanks, of which only two survived, played a pivotal role in turning the tide from looming disaster to legendary victory. In this unique study, Oscar E. Gilbert and Romain V. Cansiere use official documents, memoirs, and interviews with veterans to follow Charlie Company from its formation, and trace the movement, action - and loss - of individual tanks in this horrific four-day struggle.

The authors follow the company from training through the brutal 76-hour struggle for Tarawa. Survivor accounts and air-photo analyses document the movements - and destruction - of the company's individual tanks. It is a story of escapes from drowning tanks, and even more harrowing extrications from tanks knocked out behind Japanese lines. It is a story of men doing whatever needed to be done, from burying the dead to hand-carrying heavy cannon ammunition forward under fire. It is the story of how the two surviving tanks and their crews expanded a perilously thin beachhead and cleared the way for critical reinforcements to come ashore. But most of all, it is a story of how a few unsung Marines helped turn near disaster into epic victory.