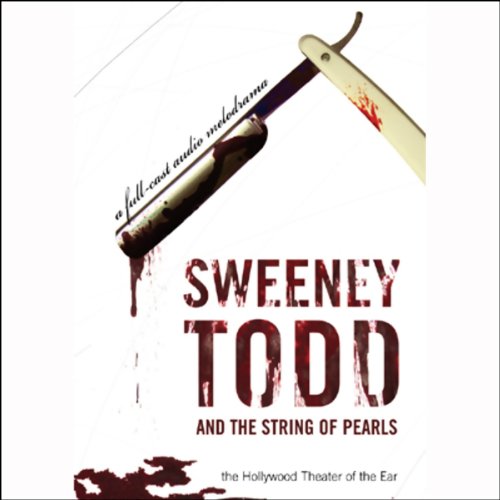 Sweeney Todd and the String of Pearls

According to legend, Sweeney Todd had his barber shop at number 186 Fleet Street, next door to St. Dunstan's Church, just a few blocks away from the Royal Courts of Justice. On this site, they say, he robbed and murdered more than 150 customers. To dispose of their remains, he carried them through underground tunnels to the bakery of one Mrs. Lovett a few blocks away, where they supplied the stuffing for her meat pies, the favorite mid-day repast of the lawyers who worked nearby and got their shaves from Sweeney Todd. The man you lunched with yesterday could be your lunch today!

The story first appeared in 1846 as a best-selling "penny dreadful", a sensational thriller published in installments. Before the final chapters even had a chance to hit the stands, the first stage version was packing them in at the Royal Britannia Saloon. Since then, there have been numerous stage and literary versions of the story.

This script has been specially commissioned by Blackstone Audio, Inc., based on the original sources of the tale.

The movie based on this classic will be released on December 21, 2007. It will be directed by Tim Burton and will star Johnny Depp.