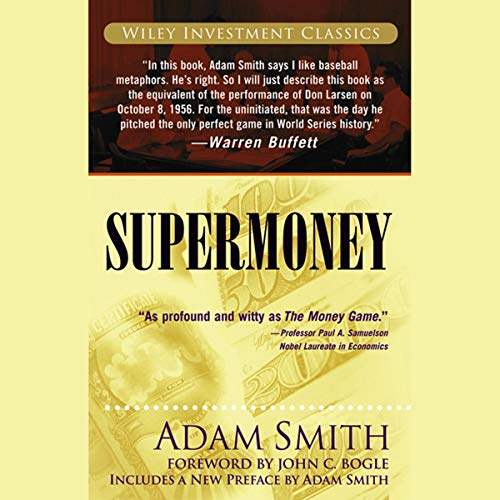 "Adam Smith continues to dazzle and sparkle! With the passage of time, Supermoney has, if anything, added to its power to inspire, arouse, provoke, motivate, inform, illuminate, entertain, and guide a whole new generation of readers, while marvelously reprising the global money show for earlier fans." (David M. Darst, author of The Art of Asset Allocation, managing director and chief investment strategist, Morgan Stanley Individual Investor Group)

"Nobody has written about the craft of money management with more insight, humor, and understanding than Adam Smith. Over the years, he has consistently separated wisdom from whimsy, brilliance from bluster, and character from chicanery." (Byron R. Wien, coauthor of Soros on Soros, chief investment strategist, Pequot Capital Management)

Supermoney may be even more relevant today than when it was first published nearly 25 years ago. Written in the bright and funny style that became Adam Smith's trademark, this audiobook gives a view inside institutions, professionals, and the nature of markets that has rarely been shown before or since. "Adam Smith" was the first to introduce an obscure fund manager in Omaha, Nebraska, named Warren Buffett. In this new edition, Smith provides a fresh perspective in an updated preface that contextualizes the applicability of the markets of the 1960s and 1970s to today's markets. Things change, but sometimes the more they change, the more they stay the same.