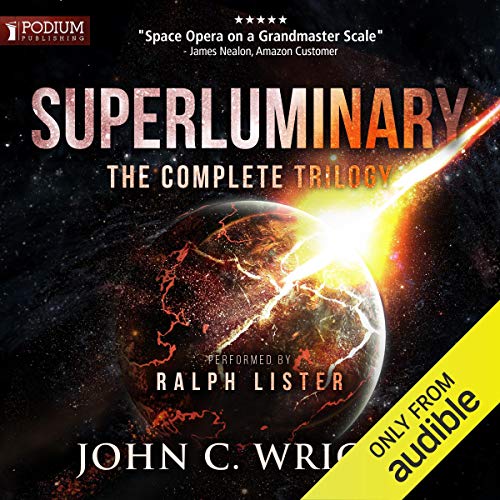 The Lords of Creation rule the Nine Worlds through its control of the ultra-advanced technology that has permitted the colonization of the entire solar System. More gods than men, the Lords of Creation have cheated Death itself. But although they rule the solar system with their god-like scientific knowledge, there are even more powerful forces to be feared lurking out in the dark depths of space.

And when an unthinkably terrible enemy that rules a vast network of dead stars and planets comes to the Nine Worlds, it falls to them to stop it, though entire worlds may perish. But how can the Lords of Creation hope to stop the nightmarish undead monstrosities when they are bitterly divided by pride, jealousy, and mutual suspicion?

A tour de force of science fiction at its mind-blowing best, Superluminary: The Complete Trilogy consists of The Lords of Creation, book 1; The Space Vampires, book 2; and The World Armada, book 3.

This is the latest and most brilliant creation of science fiction grandmaster John C. Wright, the Dragon-award winning author of The Unwithering Realm, The Golden Age, Moth & Cobweb, and Awake in the Night Land.

While I adore John C. Wright's "Golden Age" books, this one I most definitely did not. Completely soulless, masturbatory technobabble, interposed with large numbers. My initial interest and goodwill withered to near fatal boredom towards the middle of the "story", and by the end of it all I had left was mild disgust. The author's "Golden Transcendence" was so breathtaking and moving, with just the right amount of science-fiction as well as speculative philosophy, that actually gave "Superluminary" a second go a few weeks later; alas, it was just as absurd.