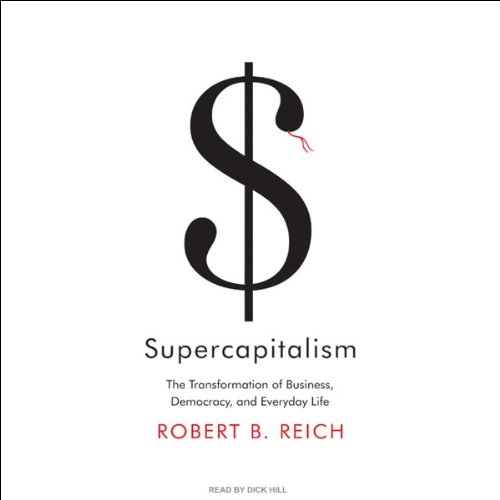 Since the 1970s, and notwithstanding three recessions, the U.S. economy has soared. Consumers have been treated to a vast array of new products, while the prices of standard goods and services have declined. Companies have also become far more efficient, and the stock market has surged. In short, American capitalism has been a triumph, and it has spread throughout the world.

At the same time, argues the former U.S. secretary of labor, Robert B. Reich, the effectiveness of democracy in America has declined. It has grown less responsive to the citizenry, and people are feeling more and more helpless as a result. In Supercapitalism, Reich discusses how capitalism has spilled over into politics, how it threatens democracy, and how citizens both benefit from and lose out because of supercapitalism.

"A thought-provoking analysis....A must-read for anyone interested in the health of American democracy." (Laura Tyson, former chairman, National Economic Council)
"Supercapitalism reminds us that the power of political courage grows when it is joined with clear thinking." (Bill Bradley, author of The New American Story)