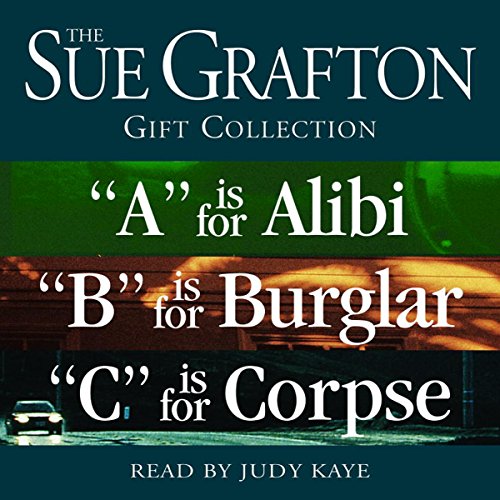 Here together for the first time in audio are the three mysteries that started it all, introducing sexy, savvy ex-cop turned P.I. Kinsey Millhone to listeners everywhere.

Nikki Fife, convicted of murdering her husband Laurence, is out on parole after eight years of prison. Now, she hires Kinsey Millhone to find out who really killed Laurence. The trail will twist and turn until finally turning back on itself, bringing Kinsey face-to-face with a killer cunning enough to get away with murder.

"B" Is for Burglar

Elaine Boldt is missing, and her sister wants Kinsey Millhone to find her. It seems to be a routine job - until Kinsey is ordered to drop the investigation just as she discovers that days before Elaine's disappearance, her next-door neighbor and bridge partner had been murdered. Now, the killer is still at large...and looking for Kinsey.

"C" Is for Corpse

Kinsey Millhone is recruited to help Bobby Callahan, a young man struggling back to life after his Porsche was forced to take a near-fatal nose dive over the edge of a canyon. Three days later Bobby is dead and Kinsey must capture a cold-blooded killer before he strikes again.