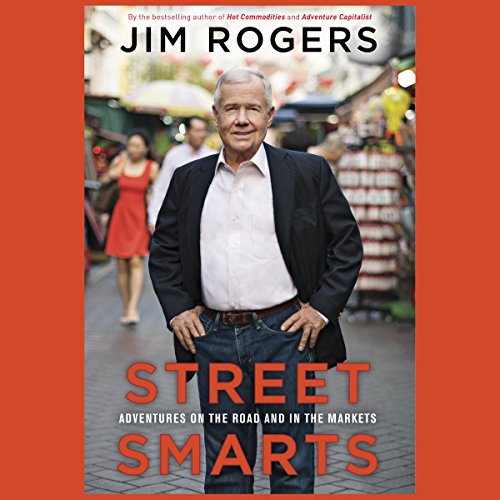 Wall Street legend and best-selling author Jim Rogers offers investing insights and economic, political, and social analysis, drawing on lessons and observations from his lifetime in the markets.

Jim Rogers, whose entertaining accounts of his travels around the world - studying the markets from Russia to Singapore from the ground up - has enthralled investors and Wall Street aficionados for two decades in such books as Investment Biker, Adventure Capitalist, Hot Commodities, and A Bull In China . In his engaging memoir Street Smarts, Rogers offers pithy commentary from a lifetime of adventure, from his early years growing up a naïve kid in Demopolis, Alabama, to his fledgling career on Wall Street, to his cofounding the wildly successful Quantum Fund.[omit George Soros] Rogers always had a restless curiosity to experience and understand the world around him.

In Street Smarts, he takes us through the highlights of his life in the financial markets, from his school days at Yale and Oxford - where despite the fact that he didn’t have enough money to afford the appropriate pair of shoes, he coaxed the crew and helped to win the Oxford-Cambridge Boat Race as well as the Thames Cup, the first of his three Guiness World Records, - to his first heady taste of Wall Street in the mid - 1960s, and his years helping to run the most successful hedge fund on Wall Street. As a result of his extraordinary success with the Quantum Fund, Rogers was able to retire at the age of thirty-seven. Since then he has taught classes in finance at Columbia University, hosted television programs, and traveled the world seeing firsthand how revolutions in Chile affect coffee prices in Seattle, and how shortages of copper in Africa affect electricity brownouts in Ohio.

In the course of his new book, Rogers offers often surprising observations on how the world works - and what trends he sees in the future. He explains why Asia will be the dominant economic force in the 21st century - and how he and his wife and two daughters moved to Singapore to prepare his family for the coming changes.. He discusses why America and the European Union are in decline, and what we need to do to right our economy and society. The age of Wall Street, Rogers claims, when the finance industry drove 25% of America’s growth, is over. Tomorrow’s economy will be driven by those who make things - food, energy, goods and consumables.

Regarded as one of the most astute investors Wall Street has ever known, Jim Rogers once again is at his acerbic and storytelling best.

"Street Smarts" is another great read from one of the most astute global investors of our time. With wisdom, humor, and amusing antidotes, the Investment Biker recounts his life's experiences in a manner that is as entertaining as it is educational. As an added surprise, readers may find his insight on fatherhood even more valuable than his perspective on history, economics, and the financial markets. (Peter D. Schiff; best-selling author, host of the Peter Schiff Radio Show, and CEO of Euro Pacific Capital, Inc.)
"There are almost no investment geniuses. The only ones I know of are Warren E. Buffett and John C. Bogle and Jim Rogers." (Ben Stein, New York Times)
“Jim Rogers makes my head hurt.” (Paul Krugman, New York Times)