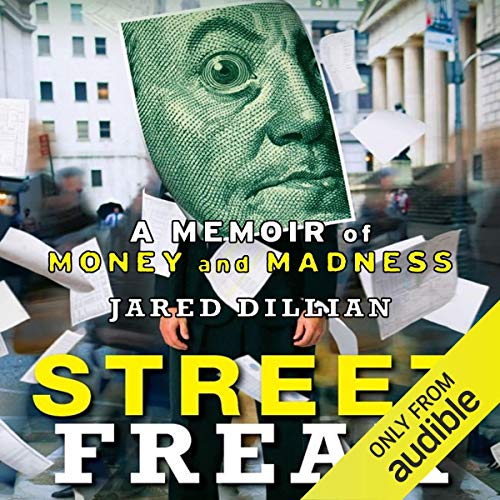 When Jared Dillian joined Lehman Brothers in 2001, he fulfilled a life-long dream to make it on Wall Street - but he had no idea how close to the edge the job would take him. Like Michael Lewis' classic Liar's Poker, Jared Dillian's Street Freak takes listeners behind the scenes of the legendary Lehman Brothers, exposing its outrageous and often hilarious corporate culture. In this ultracompetitive Ivy League world where men would flip over each other’s ties to check out the labels, Dillian was an outsider as an ex-military, working-class guy in a Men's Wearhouse suit. But he was scrappy and determined; in interviews he told potential managers that, "Nobody can work harder than me. Nobody is willing to put in the hours I will put in. I am insane." As it turned out, on Wall Street insanity is not an undesirable quality. Dillian rose from green associate, checking IDs at the entrance to the trading floor in the paranoid days following 9/11, to become an integral part of Lehman's culture in its final years as the firm's head Exchange-Traded Fund (ETF) trader. More than $1 trillion in wealth passed through his hands, but at the cost of an untold number of smashed telephones and tape dispensers. Over time, the exhilarating and explosively stressful job took its toll on him. The extreme highs and lows of the trading floor masked and exacerbated the symptoms of Dillian's undiagnosed bipolar and obsessive compulsive disorders, leading to a downward spiral that eventually landed him in a psychiatric ward. Dillian put his life back together, returning to work healthier than ever before, but Lehman itself had seemingly gone mad, having made outrageous bets on commercial real estate, and was quickly headed for self-destruction. A raucous account of the final years of Lehman Brothers, from 9/11 at its World Financial Center offices through the firm's bankruptcy, including vivid portraits of trading-floor culture, the financial meltdown, and the company's ultimate collapse.

I loved the story!

Jared is a great story teller with a good sense for humor.
Anybody interested in trading or Wall Street from a perspective of an obsessed trader should buy this audiobook.