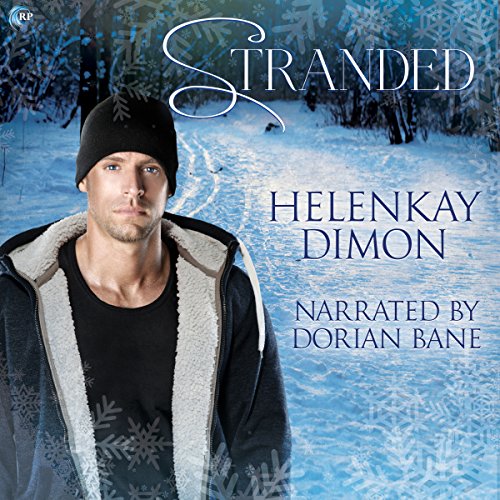 Cabe got out of the gun-for-hire business the hard way - by nearly dying. Except then his former boss calls in one last favor for one final job. The mission should be simple: get a message to a retired operative in Alaska. But it puts Cabe face-to-face with the one man he doesn't want to see and can never forget. Not after all the secrets and lies. Not after Brax almost killed him.

Brax Hughes lived hard and retired young to a cabin in the middle of nowhere. Well, that was the plan, but before he can hang up his sniper rifle, he has one last mission: win back Kyle Cabe. Brax wants another chance, wants to come clean, but after months of lying to Cabe, he knows he could face a bullet - or worse - when they meet again. And they will meet. Brax made sure of that.

With a storm moving in and someone lurking outside the cabin, time is running out. Brax needs to talk fast and keep his weapons ready. And his best weapon is the truth.

Review on 'Stranded' by HelenKay Dimon

Brax Hughes is on a highly dangerous mission. After a disastrous multiple crossing secret job he had to shoot his lover Cabe to keep him alive (how crazy is that?!). Kyle Cabe, not knowing what had been going on at all, is furious, lost and deeply sad, when he learns that Brax had been taken out on a later job, while he struggled with his recovery.Meeting Brax now alive in the middle of a storm at a hut nowhere in the Alaskan wilderness opens a biiiiiiiiiig box of mixed emotions inside him. Will his fury about Brax's betrayal win over his other strong feelings? Can Cabe dare to trust Brax again?

I love HelenKay Dimon's fluent writing and her intense way of combining complicated spy secrets and strong guys with even stronger emotions. With „Stranded“ however I often felt as confused as Cabe, wondering when further intel would come and clear the situation. Maybe the story has been too short for untangling all that secret agent stuff? The appearence of another fellow agent further added to my„did I miss something else?“ feeling. With two top secretive agents I wondered if there woud have been any other way for Brax to keep Cabe protected.

Dorian Bane has done a great narration job lending his voice to this fast pace short story. His interpretation of angry, confused Cabe is as stunning as his deep, growling voice variation for desperately hopeful but tongue tied Brax. Both MCs sound perfect as I had „heard“ them in my reading imagination already. Still even Mr. Bane doesn't manage to clear up all that thick secret fog of confusion and misunderstanding around the two struggeling retired assassins. I found myself prefering the book version to the audio one for the first part of the story as it gave me more time to keep up with all those half infos and fast pace feelings. The second part was just the other way round. I loved listening to Brax and Cabe's hot and emotional next encounter towards their HEA ending.

I like that part of this book sell is donated to the GLBT National Help Center.