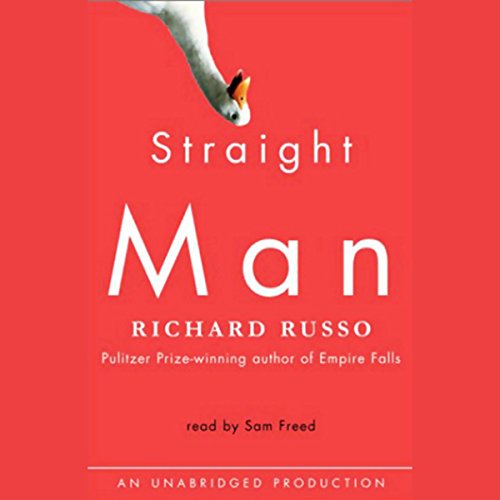 In this uproarious novel, Richard Russo performs his characteristic high-wire walk between hilarity and heartbreak. Russo's protagonist is William Henry Devereaux, Jr., the reluctant chairman of the English department of a badly underfunded college in the Pennsylvania rust belt. Devereaux's reluctance is partly rooted in his character he is a born anarchist and partly in the fact that his department is more savagely divided than the Balkans.

In the course of a single week, Devereaux will have his nose mangled by an angry colleague, imagine his wife is having an affair with his dean, wonder if a curvaceous adjunct is trying to seduce him with peach pits, and threaten to execute a goose on local television. All this while coming to terms with his philandering father, the dereliction of his youthful promise, and the ominous failure of certain vital body functions. In short, Straight Man is classic Russo side-splitting and true-to-life, witty, compassionate, and impossible to put down.

"There is a big, wry heart beating at the center of Russo's fiction." ( The New Yorker)
"[Russo] skewers academic pretensions and infighting with mad abandon...in a clear and muscular prose that is a pleasure to read...I had to stop often to guffaw, gasp, wheeze and wipe away my tears." ( Chicago Sun-Times)
"Russo can penetrate to the tender quick of ordinary, American lives." ( Entertainment Weekly)