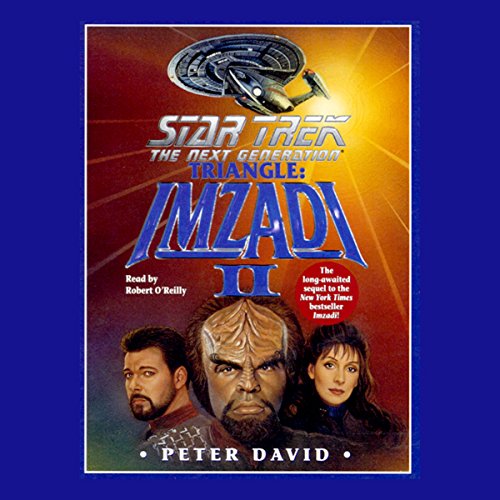 Imzadi: to the people of the planet Betazed, including counsellor Deanna Troi of the Starship Enterprise, it means "beloved" and denotes a special closeness that can never be truly broken. Or can it? Best selling author Peter David explored the special bond between Troi and Commander Riker in his earlier novel, Imzadi. Now, he examines the heart of Deanna Troi from an altogether different perspective, as he reveals for the first time the full story of Troi's troubled romance with Lieutenant Commander Worf. At first glance, they cannot be more different. She is an empath, gentle and acutely sensitive to the needs and feelings of others. He is a fierce Klingon warrior, dedicated to a harsh and war-like code of honor. Brought together, however, by a common need to care for Alexander, Worf's troubled, motherless son, they discover hidden reserves of courage and compassion within each other and embark on an unexpected courtship, much to the suprise and discomfort of William Riker. But does Worf's future really lie with Deanna...or on a distant outpost called Deep Space Nine? And who shall Troi ultimately call Imzadi? Imzadi ll is a compelling story about an untold chapter in the history of the U.S.S. Enterprise.