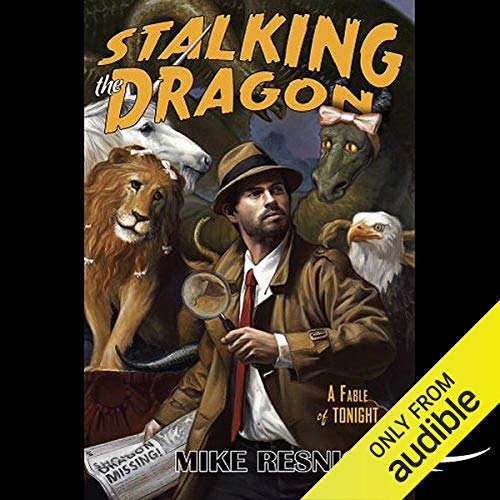 It's Valentine's Day and private detective John Justin Mallory is planning on closing up the office early and taking his partner, Col. Winnifred Carruthers, out to dinner, since he's sure no one else will do so. But before he can turn off the lights and lock the door, a panic-stricken Buffalo Bill Brody visits them.

It seems that the Eastminster pet show is being held the next day, and his dragon, Fluffy, the heavy favorite, has been kidnapped. Mallory's nocturnal hunt for the miniature dragon takes him to some of the stranger sections of this Manhattan - Greenwitch Village (which is right around the corner from Greenwich Village and is populated by witches and covens); a wax museum where figures of Humphrey Bogart, Sydney Greenstreet and Peter Lorre come alive; Gracie Mansion (which is haunted by the ghosts of former mayors); and the Bureau of Missing Creatures, a movie set where they're filming a PBS documentary on zombies and various other denizens of the Manhattan night.

As Mallory follows the leads and hunts for clues, he comes up against one dead end after another. Along the way he meets a few old friends and enemies, and a host of strange new inhabitants of this otherworldly Manhattan. Aided by a strange goblin named Jeeves, Mallory has only one night to find a tiny dragon that's hidden somewhere in a city of seven million.