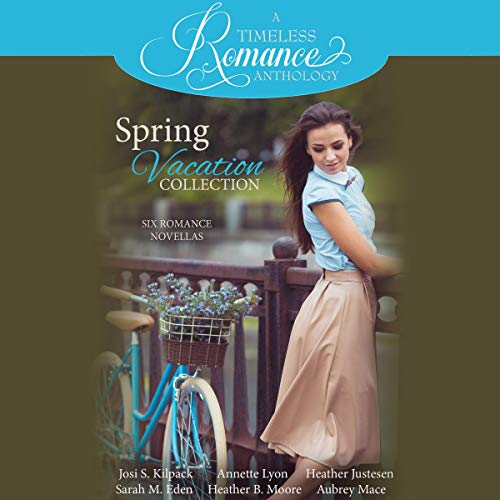 Six Award-Winning Authors have contributed new stories to A Timeless Romance Anthology: Spring Vacation Collection. Readers will love this collection of six sweet contemporary romance novellas, centered on a Spring Vacation, all with one thing in common: Romance. In Moonlight Kiss, a delightful story by Josi S. Kilpack, Sarah is looking forward to the company retreat, namely because she'll finally meet Clint - the man she's been Instant Messaging for a few months. As a single mom, Sarah gets out... well, never. So adding vacation days onto the retreat so she can spend time with Clint is daring, yet exciting. She just hopes that the suave on-line Clint will live up to the man she hopes to share her heart with. In Annette Lyon's charming novella, Chasing Tess, Tess had been patiently waiting through three years of law school for James to pop the question. The night has finally arrived - at his graduation party. But his big announcement turns out to be completely unexpected... and devastating. Tess flees the party, promising herself she'll never let herself waste time on James again. But as she makes a desperate cross-country drive, James makes his own plans on how to win her back. Dancing at the Flea Market is a sweet romance by Heather Justesen. Mara, fresh out of the cold North Dakota tundra, spends her spring break in Texas with close friend, Anna. When the two women run into Carter, an impatient man with a painful past, it takes hearing Mara's stunning voice at the local Karaoke club to thaw his heart. But as Mara gets to know Carter, she has to decide if the distance between their lives and homes is worth trying to bridge. In Sarah M. Eden's captivating novella, The Best Laid Plans, Madison gives up a vacation to Cancún with her office friends to return home and babysit her mother, who is in another sketchy relationship. The only problem with returning home is running into Derek, her ex-boyfriend who she decided to break up with before he could break up with her - Madison believes in always being one step ahead. When Derek teams up with Madison to investigate whether her mother is dating the right guy, Madison has a hard time ignoring what her heart is telling her about giving Derek another chance. Picture Perfect, an exciting story by Heather B. Moore, follows Gemma who has never done anything out of the ordinary, until her boyfriend Randy starts to ignore her. But even cutting and dyeing her hair doesn't get his attention. In Aubrey Mace's enchanting romance, The Science of Sentiment, Rosie will do anything to forget Kevin, his completely perfect kisses, and the fact that he dumped her. When she arrives at her grandfather's mountain cabin for a spring getaway, she discovers her worst nightmare - Kevin has been invited to stay the weekend too.