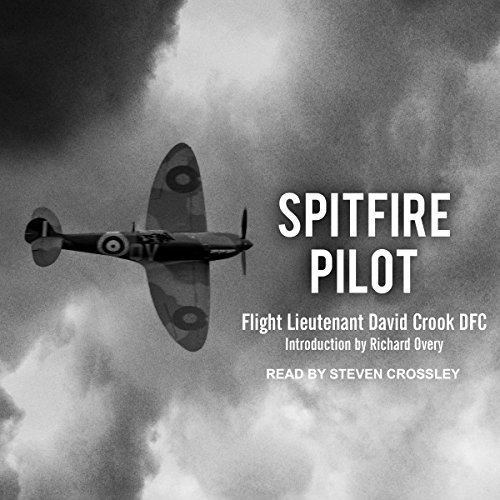 At the outbreak of the Second World War D. M. Crook, of No. 609 Squadron AAF, was at Yeadon, still undergoing his training; by the winter of 1939-40, he had his wings.

Successfully applying to return to his Squadron, then on defense duties in northern England, Crook began to familiarize himself with their new fighter: the Spitfire.

Soon they were posted to RAF Northolt, and it was at this time that Crook, much to his chagrin, was left grounded, undergoing knee surgery as they flew over Dunkirk.

Following the Allied evacuation from France, Crook returned to the air and found himself facing the relentless sorties as the skies above Britain transformed into a battlefield. In one particularly frank passage, Crook recounts how he mistakenly shot down a Blenheim, going on to illustrate how easy it was for pilots to misidentify aircraft.

Spitfire Pilot is a remarkable account of one officer's life in 609 Squadron during one of the most famous battles of the Second World War.

I have slightly mixed feelings about this kind of book. This isn´t a diary. It has been published I think in 1943, and is based on the diaries of David Corooke. Being published by the air ministry this is a sanitized version of what it was like to be fighter pilot, basically it is propaganda ( I mean it was meant to be uplifting and boost morale, which was brilliant in 1943). Everbody is great chap, brilliant company and so on. Because almost everyone dies it is probably that one isn´t supposed to talk badly about the dead.

I think that is all due to honest and noble motifs, but when the preface says that this actually how it was I have severe doubts. I personally think, that this book has to be read with more than a pinch of salt as an historical document. I think the book itself is pretty good, but I dislike the preface and the afterthoughts.