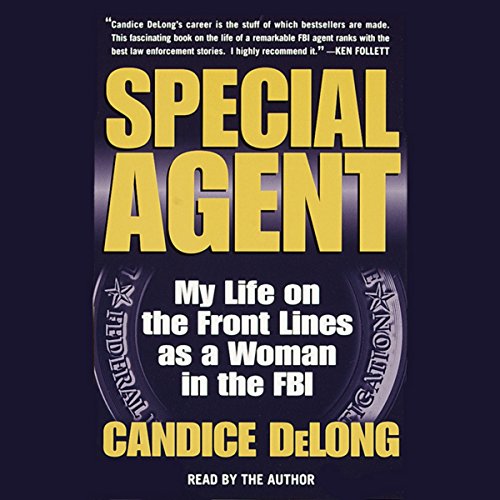 For twenty years, Candice DeLong was on the front lines of some of the FBI's most memorable and gripping cases. Some have called her a real life Clarice Starling and a female Donnie Brasco. She has tailed terrorists, gone undercover as a gangster's moll, and was one of the agents chosen to carry out the manhunt for the Unabomber in Montana. Now, for the first time, she reveals the dangers and rewards of her career as a field profiler in the FBI - the world's most powerful law enforcement agency.

Now retired, Agent DeLong offers a "day-in-the-life" glimpse of her work. Field profiling - pioneered by John Douglas and Roy Hazelwood, who trained Agent DeLong - is one of the most fascinating and challenging branches of the FBI. She traces the unusual career path that led her to crime fighting, and recounts the obstacles she faced as a woman and as a fledgling agent.

DeLong takes listeners step by step through the profiling process and shows how she helped solve several incredible cases. The story of her role investigating leads on the notorious Tylenol Murderer case is utterly compelling. And, she gives a true, behind-the-scene insider's account of the efforts leading to the arrest of the Unabomber, including the media interference that nearly botched the case.

A remarkable portrait of courage and grace under fire, Special Agent fills a missing chapter in the annals of law enforcement literature and provides a dramatic and often funny portrait of an extraordinary woman who has dedicated her heart and soul to the crusade against crime.

"Candice DeLong's career is the stuff of which best sellers are made. This fascinating book on the life of a remarkable FBI agent ranks with the best law enforcement stories. I highly recommend it." (Ken Follett)
Hörerbewertungen
Bewertung
Gesamt
Sprecher
Geschichte