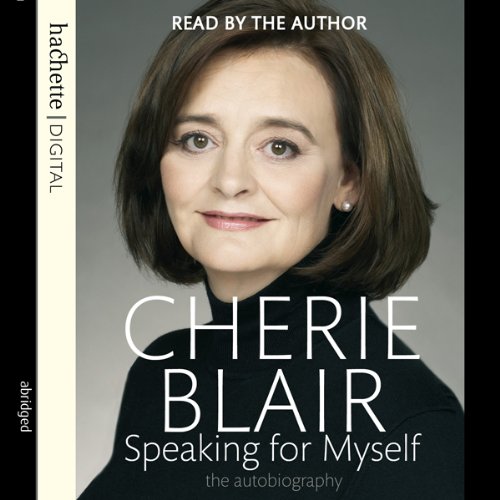 In her much-anticipated autobiography, Cherie Blair takes the reader on a fascinating journey from her childhood in working-class Liverpool to the heart of the British legal system and then, as the wife of the prime minister, to 10 Downing Street.

Cherie Blair's unconventional childhood was full of drama. Abandoned by her father at an early age, she was raised by her mother and grandmother. They instilled in her a fierce sense of justice, along with the indomitable Scouse spirit and humour that has often served her well, and occasionally landed her in trouble.

The first in her family to attend university, Cherie became a highly successful barrister in a profession not used to encouraging working-class women. When she met and fell in love with Tony Blair, she had no idea that her life would take an even more remarkable turn.

The first British prime minister's wife to have a serious career, she found herself in a new and challenging role in the public eye. In Speaking for Myself, she describes for the first time what it was like to combine this role with life as a working mother.

A warm, intimate, and often very funny portrait of a family living in extraordinary circumstances, Speaking for Myself is as lively, frank, and insightful as its author.