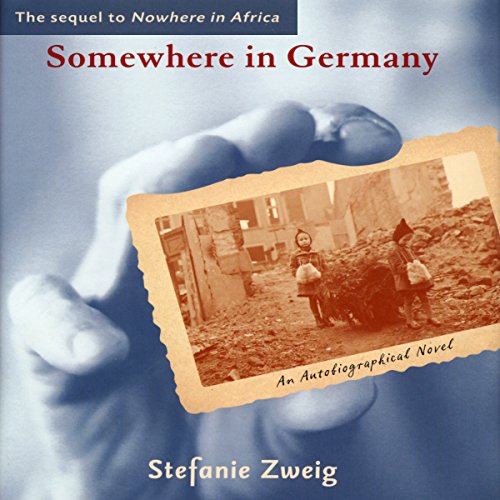 Somewhere in Germany is the sequel to the acclaimed Nowhere in Africa, which was turned into the Oscar-winning film of the same name. This novel traces the return of the Redlich family to Germany after their nine-year exile in Kenya during World War II. In Africa, Walter had longed for his homeland and dreamed of rebuilding his life as a lawyer, yet ultimately he and his family - wife Jettel, daughter Regina, and baby Max - realize that Germany seems as exotic and unwelcoming to them in 1947 as Kenya had seemed in 1938. Hunger and desperation are omnipresent in bombed-out Frankfurt, and this Jewish family - especially Regina, who misses Africa the most - has a hard time adjusting to their new circumstances.

Yet slowly the family adapts to their new home amidst the ruins. In Frankfurt, Regina matures into a woman and, though her parents want her to marry an upstanding Jewish man, her love life progresses in its own idiosyncratic fashion. She develops a passion for art and journalism and begins her professional career at a Frankfurt newspaper. Walter at last finds professional success as a lawyer, but never quite adjusts to life in Frankfurt, recalling with nostalgia his childhood in Upper Silesia and his years in Africa. Only his son Max truly finds what Walter had hoped for: A new homeland in Germany.

Although the Redlichs receive kindness from strangers, they also learn anti-Semitism still prevails in post-Nazi Germany. They partake in the West German "economic miracle" with their own home, a second-hand car, and the discovery of television, but young Max's discovery of the Holocaust revives long-buried memories. Rich in memorable moments and characters, this novel portrays the reality of postwar German society in vivid and candid detail.