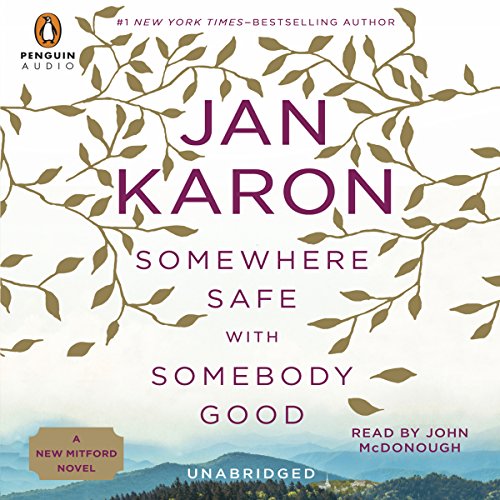 Somewhere Safe with Somebody Good

After five hectic years of retirement from Lord's Chapel, Father Tim Kavanagh returns with his wife, Cynthia, from a so-called pleasure trip to the land of his Irish ancestors. While glad to be at home in Mitford, something is definitely missing: a pulpit. But when he's offered one, he decides he doesn't want it. Maybe he's lost his passion.

His adopted son, Dooley, wrestles with his own passion - for the beautiful and gifted Lace Turner, and his vision to become a successful country vet. Dooley's brother, Sammy, still enraged by his mother's abandonment, destroys one of Father Tim's prized possessions. And Hope Murphy, owner of Happy Endings bookstore, struggles with the potential loss of her unborn child and her hard-won business.

All this as Wanda's Feel Good Cafe opens, a romance catches fire through an Internet word game, their former mayor hatches a reelection campaign to throw the bums out, and the weekly Muse poses a probing inquiry: Does Mitford still take care of its own?

Millions of fans will applaud the chance to spend time, once more, in the often comic and utterly human presence of Jan Karon's characters. Indeed, they have never been more sympathetic, bighearted, and engaging.