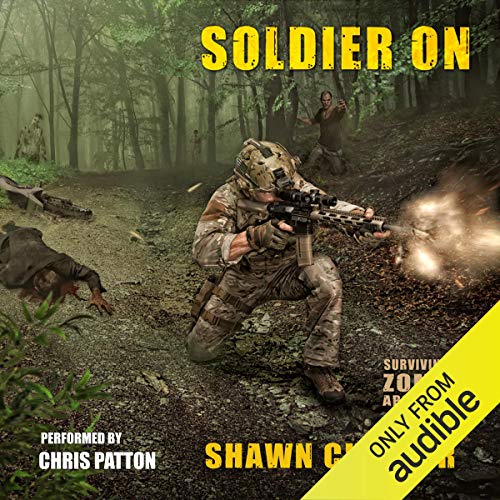 For Cade Grayson, father, husband, and former Delta Force operator, life has changed drastically over the course of 48 hours. He's watched the dead inexplicably return to life before his very eyes. He's lost many people near and dear to him, most dying unfathomably horrible deaths at the hands of the dead who have seemingly overnight taken over the big metropolis - their numbers and hunger for human flesh growing exponentially with each passing hour.

After having been forced to kill his reanimated neighbors in self-defense and then surviving the perilous overland journey from his home in Portland, Oregon, Cade finds temporary refuge inside the wire of a Special Forces garrison on the outskirts of Salt Lake City, Utah.

But his stay is short and he decides to strike out alone, resuming the search for his missing wife, Brook, and 11-year-old daughter, Raven, the only way he knows how - with a laser-like focus and full speed ahead.

So in the early morning hours on day four of what might be the United States and perhaps the entire globe's extinction-level event, he slips out Camp Williams' back gate riding a specially modified off-road motorcycle.

Armed and resupplied and with only a satellite phone connecting him to the crumbling world, Cade soldiers on eastbound - locked and loaded - with Myrtle Beach, South Carolina, his small family's last known whereabouts, dead set in his sights.

Meanwhile, 400 miles away in Colorado Springs, Colorado - the new capital of the United States, President-by-succession Valerie Clay works round the clock with what's left of the military to gather together the resources and scientific know-how necessary to stop the Omega Virus' rapid spread and, starting with Colorado Springs, rid the country of the multitudes of walking dead.

Will the 1900 miles and the millions of dead in Cade's path succeed in keeping him separated from his family?

Will mankind find a foothold against the dead and turn the tide of war?

Cade Grayson, locked and loaded, is determined to find out.

From begin to the end exciting and i enjoyed it.

Was hat Ihnen am allerbesten an Soldier On gefallen?

Thats the second audiobook in this series and it follows the story of an highly trained ex soldier, who tries to get to his family and find a new life and place in this now existing apocalyptic new world.
Sorry no spoiler, hear it by yourself. I enjoyed it very much.

Hm, there are two possible series that would fit. one is The Survivalist from Arthur T. Bradley, where a Us marshal has to find his way in the new apocalytic world.
The second is Zombie Rules: Zombie Rules from David Achord, where a young man trained by an old vetran is growing and... no i don't spoiler. Hear by yourself and enjoy.

Yes i have heard the first book of this series and it was the same exiting and enjoy to hear now the second one.

During hearing this book you could imagine and fell what the characters are living in and the decision they have done. I heard a part of it in a relaxing situation at the pool and was very supriced that the waiter suddenly stand in front of me... good that i have had no shotgun...lol

I have read and heard a lot of this genre and this series is really enjoyable. Its exiting i have had no boring parts and the the characters grow or go under in the apocalyptic world. Some sadly some...yeah they got him..., i only highly recommend this series and hope the last books are also comming out as an audiobook. And for myself i could only say, i will buy them in the next days on amazon, read them but if they come as audiobook i buy them too. Its a diffrence to read a good book or to hear a good book.