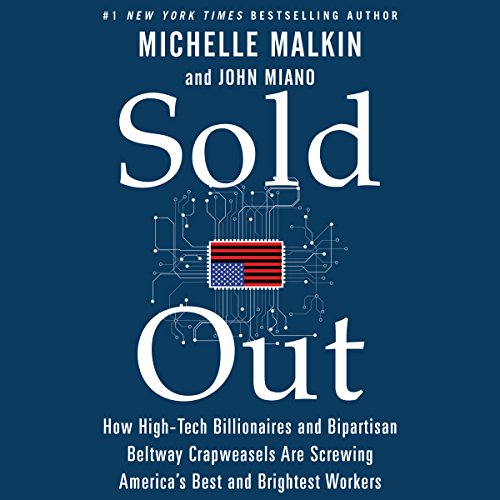 In Sold Out, Michelle Malkin and John Miano reveal the worst perpetrators screwing America's high-skilled workers, how and why they're doing it - and what we must do to stop them. In this audiobook, they will name names and expose the lies of those who pretend to champion the middle class while aiding and abetting massive layoffs of highly skilled American workers in favor of cheap foreign labor. Malkin and Miano will explode some of the most commonly told myths spread in the media, like these:

Lie #1: America is suffering from an apocalyptic "shortage" of science, technology, engineering, and math workers.

Lie #2: US companies cannot function without an unlimited injection of the most "highly skilled" and "highly educated" foreign workers, who offer intellectual capital and entrepreneurial energy that American workers can't match.

Lie #3: America's best and brightest talents are protected because employers are required to demonstrate that they've made every effort to hire American citizens before resorting to foreign labor.

For too long, open-borders tech billionaires and their political enablers have escaped tough public scrutiny of their means and motives. Sold Out is an indictment of not only political corruption in Washington but also the journalistic malpractice that enables it. It's time to trade the whitewash for solvent. American workers deserve better, and the public deserves the unvarnished truth.