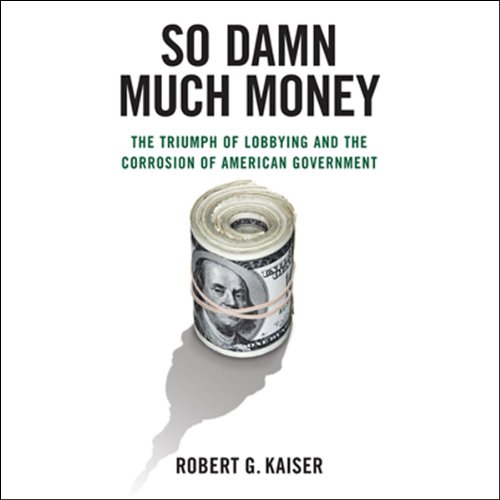 So Damn Much Money

In this sometimes shocking and always riveting book, Robert G. Kaiser, who has covered Congress, the White House, and national politics for The Washington Post since 1963, explains how and why, over the last four decades, Washington became a dysfunctional capital.

At the heart of his story is money - money from special interests using campaign contributions and lobbyists to influence government decisions, and money demanded by congressional candidates to pay for their increasingly expensive campaigns, which can cost a staggering sum. Politicians' need for money and the willingness, even eagerness, of special interests and lobbyists to provide it explain much of what has gone wrong in Washington. They have created a mutually beneficial, mutually reinforcing relationship between special interests and elected representatives, and they have created a new class in Washington, wealthy lobbyists whose careers often begin in public service.

Kaiser shows us how behavior by public officials that was once considered corrupt or improper became commonplace, how special interests became the principal funders of elections, and how our biggest national problems - health care, global warming, and the looming crises of Medicare and Social Security, among others - have been ignored as a result.

Kaiser illuminates this progression through the saga of Gerald S. J. Cassidy who came to Washington in 1969 as an idealistic young lawyer determined to help feed the hungry. Over the course of 30 years, he built one of the city's largest and most profitable lobbying firms and accumulated a personal fortune. Cassidy's story provides an unprecedented view of lobbying.

This is a timely and tremendously important book that finally explains how Washington really works today and why it works so badly.

“With bold insight and telling detail, Robert G. Kaiser raises the curtain on Washington to reveal a tragic drama in which money triumphs over principle. Here, in a single book, is the reason why our politics must be transformed.” (Robert B. Reich, former Secretary of Labor)
“An accurate and frank description of how lobbyists and money have come to run Washington.” (Leon E. Panetta, Director of the CIA)
“Bob Kaiser has written the real story of the breakdown of our political system. In the pages of this enormously important book, we can also glimpse a path toward reform." (Carl Bernstein)