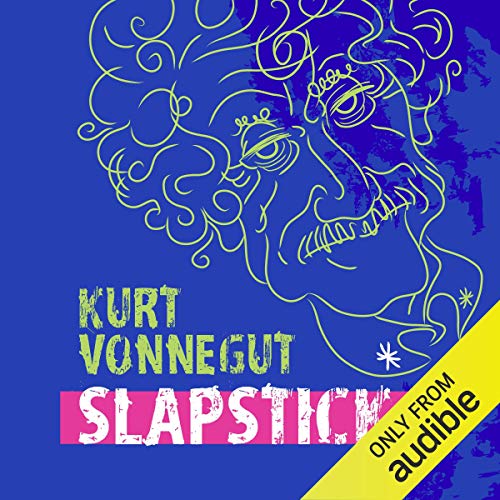 Perhaps the most autobiographical (and deliberately least disciplined) of Vonnegut's novels, Slapstick (1976) is in the form of a broken family odyssey and is surely a demonstration of its eponymous title. The story centers on brother and sister twins, children of Wilbur Swain, who are in sympathetic and (possibly) telepathic communication and who represent Vonnegut's relationship with his own sister who died young of cancer almost two decades before the book's publication. Vonnegut dedicated this to Stan Laurel and Oliver Hardy.

Like their films and routines, this novel is an exercise in non-sequentiality and in the bizarre while using those devices to expose larger and terrible truths. The twins exemplify to Swain a kind of universal love; he campaigns for it while troops of technologically miniaturized Chinese are launched upon America. Love and carnage intersect in a novel contrived to combine credibility and common observation; critics could sense Vonnegut deliberately flouting narrative constraint or imperative in an attempt to destroy the very idea of the novel he was writing.

Slapstick becomes both product and commentary, event and self-criticism; an early and influential example of contemporary "metafiction". Vonnegut's tragic life - like the tragic lives of Laurel, Hardy, Buster Keaten and other exemplars of slapstick comedy - is the true center of a work whose cynicism overlays a trustfulness and sense of loss which are perhaps deeper and truer than expressed in any of Vonnegut's earlier or later works. Slapstick is a clear demonstration of the profound alliance of comedy and tragedy which, when Vonnegut is working close to his true sensibility, become indistinguishable.