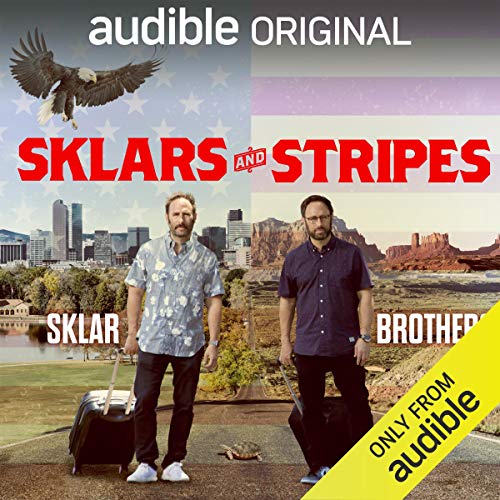 Experience a new kind of comedic audio documentary from The Sklar Brothers in this Audible original.

Randy and Jason Sklar have a knack for exploring what makes America’s cities unique and wonderful, whether it’s finding out who in San Diego serves the best burritos, why basketball is so popular among those in Bloomington, or why the people of Portland can't let go of their old airport carpeting.

2017 was a year in which everyone retreated to their bubbles – liberal, conservative, and cotton-candy scented. Everyone except Jason and Randy Sklar. They didn’t have a choice; if you’re a comedian, you get a tour date and you go to work. They traveled to red states and blue states, red cities in blue states, and blue cities in red states. What emerged throughout their travels was a real sense of what everyone was going through in a historically insane and twistedly-hilarious year. And Audible recorded their experiences, insights, and off-the-cuff jokes along the way.

On the road, Randy and Jason searched for topics specific to each community they visited – then challenged themselves to see whether they could perform jokes about those topics that locals would find funny. Along with producer and fellow traveler Scott Rogowsky (HQ Trivia), they dug into the American psyche and explored its dark and quirky crevices both on stage and off. Follow their shenanigans in this docu-comedy which visits 10 different cities, each a new chapter and a new adventure. With an arsenal of jokes and a curious mind, the Sklars attempt to answer one burning question: as a nation, can Americans still laugh at themselves?

Plus, as a special bonus in Chapter 12, all listeners receive a full album of the Sklars' stand-up from the tour: The Tour Tapes.

This is not an audiobook. This is not your grandma’s travel program. This is Sklars and Stripes.

The Sklar Brothers hosted the critically acclaimed cult hit Cheap Seats on ESPN Classic for 77 episodes, they have been guests on Comedy Central's @midnight,, HBO's Curb Your Enthusiasm and Entourage, It's Always Sunny in Philadelphia, Comedy Bang Bang, Maron and Better Call Saul. They have released four critically acclaimed comedy albums, have had two Comedy Central Half Hour Presents specials, and currently have a one hour stand up special on Netflix, What Are We Talking About. Randy and Jason also host two hit podcasts, Dumb People Town and View From The Cheap Seats.