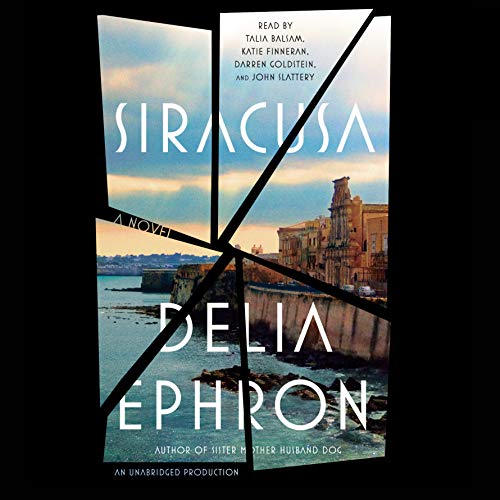 An electrifying novel about marriage and deceit from best-selling author Delia Ephron that follows two couples on vacation in Siracusa, a town on the coast of Sicily, where the secrets they have hidden from each other are exposed and relationships are unraveled.

New Yorkers Michael, a famous writer, and Lizzie, a journalist, travel to Italy with their friends from Maine - Finn; his wife, Taylor; and their daughter, Snow. "From the beginning," says Taylor, "it was a conspiracy for Lizzie and Finn to be together." In Rashomon style, with alternating points of view, the characters expose and stumble upon lies and infidelities past and present. Snow, 10 years old and precociously drawn into a far more adult drama, becomes the catalyst for catastrophe as the novel explores collusion and betrayal in marriage.

With her inimitable psychological astuteness and uncanny understanding of the human heart, Ephron delivers a powerful meditation on marriage, friendship, and the meaning of travel. Set on the sun-drenched coast of the Ionian Sea, Siracusa unfolds with the pacing of a psychological thriller and delivers an unexpected final act that none can see coming.

“[Ephron] excels at [depicting] characters’ unintended comedy, their emotional warfare and witty observations of travel and consumption....with a deft, stinging touch. They are a wise reminder that the hungers driving these people are a ravenous, even violent, business.” (The New York Times Book Review)

“An irresistible novel for fans of psychological thrillers, or those considering vacationing with former lovers and spouses (often one and the same).” (Oprah Magazine)