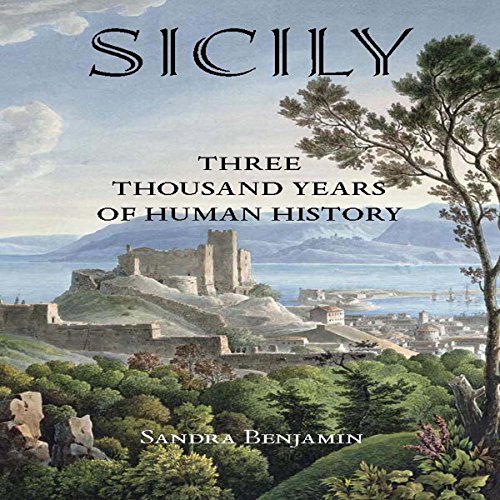 Tourists, armchair travelers, and historians will all delight in this fluid narrative that can be read straight through, dipped into over time, or used as a reference guide to each period in Sicily's fascinating tale.

Emigration of people from Sicily often overshadows the importance of the people who immigrated to the island through the centuries. These have included several who became Sicily's rulers, along with Jews, Ligurians, and Albanians. Greeks, Romans, Vandals, Goths, Byzantines, Muslims, Normans, Hohenstaufens, Spaniards, Bourbons, the Savoy Kingdom of Italy and the modern era have all held sway, and left lasting influences on the island's culture and architecture. Sicily's character has also been determined by what passed it by: events that affected Europe generally, namely the Crusades and Columbus's discovery of the Americas, remarkably had little influence on Italy's most famous island.

"A compact history of the Mediterranean's largest island, the most frequently conquered spot on earth. . . . The author does an especially good job of explaining how history never quite goes away in Sicily, how through the accretion of centuries, through so many varied influences, the island's unique culture has emerged. . . . A useful introduction to a portion of the world whose crowded history is not easily condensed." ( Kirkus Reviews)
"Benjamin ... manages to deliver this fantastic island in all its kaleidoscopic variety. Although she takes us from pre-history to present day, the pace feels unhurried and the writing almost conversational. Divided into chapters devoted to each successive wave of invader, Sicily keeps our attention in the first place thanks to Sicily's layered history and colorful cast of heroes and scoundrels. and in the second to Benjamin's wonderfully terse, ironic tone and lively sense of the ridiculous." ( Providence Journal)