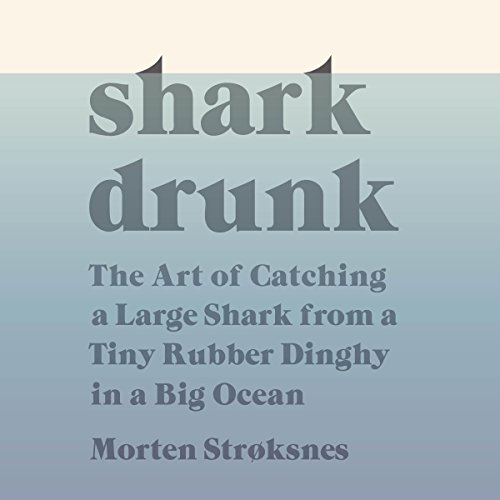 Winner of the Norwegian Brage Prize 2015

Winner of the Norwegian Critics' Prize for Literature 2015

A salty story of friendship, adventure, and the explosive life that teems beneath the ocean, for fans of Bill Bryson and such classics as The Snow Leopard.

In the great depths surrounding the Lofoten islands in Norway lives the infamous Greenland shark. At 26 feet in length and weighing more than a ton, it is truly a beast to behold. But the shark is not just known for its size alone: Its meat contains a toxin that, when consumed, has been known to make people drunk and hallucinatory. Shark Drunk is the true story of two friends, the author and the eccentric artist Hugo Aasjord, as they embark on a wild pursuit of the famed creature - from a tiny rubber boat. Together the two men tackle existential questions, survive the world's most powerful maelstrom, and, yes, get drunk as they attempt to understand the ocean from every possible angle, drawing on poetry, science, history, ecology, mythology, and their own sometimes intoxicated observations.

"Move over, Ishmael. Move over, Jonah. Move over, Izaak Walton and Norman Maclean. Make room for a fish tale, wry and fantastical, weird and melancholy, that must now take its rightful place among our classic existential stories about the denizens of the deep." (Hampton Sides, best-selling author of In the Kingdom of Ice)
"The Greenland shark is the bait. Not quite a red herring, and certainly not the reeking bull flesh used at one point as a lure, this enormous, ancient, toxic shark that Morten Strøksnes and his friend Hugo pursue through the seasons in northern Norway is nonetheless a snare and a delusion. The point is not to catch the fish. It's the phantasmagoric journey, both ultra-vivid and laconic, through the history and natural history of a remarkable region, its teeming seas and tough, resourceful locals. Hugo, a painter, mixes his paints from oil harvested from the livers of cod they catch while chasing the great shark. Strøksnes weaves his tale from a dense wool of close observation, fishing yarns, erudition lightly worn, and a helpless, consuming love of the ocean." (William Finnegan, Pulitzer Prize-winning author of Barbarian Days: A Surfing Life)
"With the open-minded inquisitiveness of Charles Darwin and the obsession of Captain Ahab, Morten Strøksnes heads out to sea, chasing a monster of the deep known as the Greenland shark. Every page of Shark Drunk feels like a cabinet of curiosities, filled with head-scratching surprises, nuggets of wisdom, and wondrous insights. Gorgeously written and thoroughly addictive." (Michael Finkel, author of The Stranger in the Woods: The Extraordinary Story of the Last True Hermit)