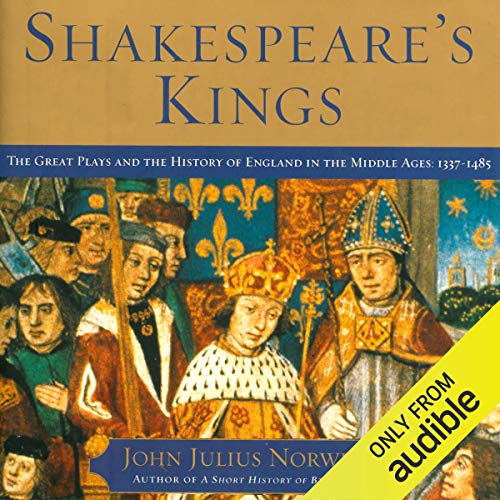 William Shakespeare may have been the greatest playwright in the English language, but how does he measure up as a historian? In this brilliant comparison between the events and characters in Shakespeare's history plays and the actual events that inspired them, acclaimed historian John Julius Norwich examines the nine works that together amount to an epic masterpiece on England's most fascinating period.

Beginning with the newly authenticated "Edward III," and proceeding through "Richard II; Henry IV Parts I" and "II; " and "Henry V; Henry VI Parts I, II," and "III; " and finally "Richard III," Norwich holds the plays up to the light of history, answering questions such as: Who was the real Falstaff? How realistic is Shakespeare's depiction of Joan of Arc? At the same time, he provides a vibrant narrative of medieval life from 1337 to 1485, the era of the 100 Years War and the Wars of the Roses. It was a time of uncertainty and incessant warfare, a time during which the crown was constantly contested, alliances were made and broken, peasants and townsmen alike arose in revolt. Here was the raw material that Shakespeare used to explore the role of the monarch and the meaning of statehood.

But where does history stop and drama begin? Norwich concludes that Shakespeare was a reliable enough historian. He was, however, always willing to take liberties with the facts for the sake of his drama. As Norwich explains, "In the vast majority of instances when Shakespeare departed from the historic truth he did so for the best of all reasons: to make a better play." Beyond assessing Shakespeare's accuracy, Norwich provides the crucial knowledge that will enhance everyone's appreciation and understanding of these glorious plays.

No one but John Julius Norwich, praised for his three-part history of Byanztium, could weave drama and history together into such a lucid and absorbing account of a distant yet vitally important era. Illuminating and accessible, Shakespeare's Kings is an indispensable companion to Shakespeare's rich imagination -- an imagination that continues to inform the way we view the past today.