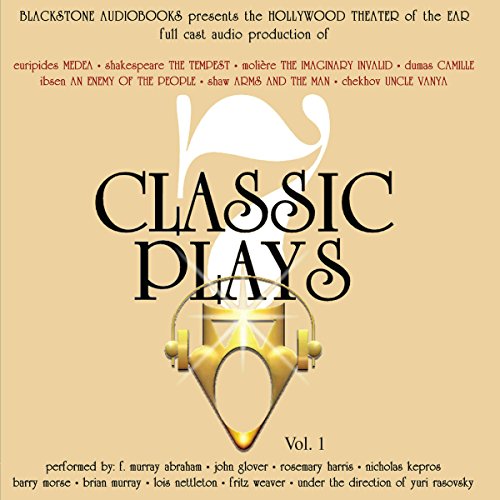 Now, for the first time in audio, Blackstone presents seven great plays in one volume: Euripides' Medea, Shakespeare's The Tempest, Moliere's The Imaginary Invalid, Dumas' Camille, Ibsen's An Enemy of the People, Shaw's Arms and the Man, and Chekhov's Uncle Vanya. These productions illustrate the development of European drama from ancient times to the threshold of the modern theater. A superb repertory company has been assembled for these recordings, all under the direction of veteran producer Yuri Rasovsky, who has won both the Audie Award for book production and the George Foster Peabody Award for broadcasting.

These are not mere readings. Rather, they are full performances using all the resources of audio to full advantage. Just as stage plays are "opened up" when adapted to film, so these selections create greater intimacy. "Staginess" is avoided, lively theatrics enhanced, while the substance of the works remains intact. For instance, in Arms and the Man, audio makes possible the judicious integration of the author's witty scene settings, written for the published version of the play, with the play itself. This is the play that established Shaw's reputation as one of the greatest wits of the London drama scene.

Music accounts for another noteworthy aspect of these productions. The Imaginary Invalid employs the score that Marc-Antoine Charpentier composed for Moliere's own premiere. It is conducted by Steven Ovitsky, artistic director of the Milwaukee Symphony.

The Tempest, composed by Shakespeare as a multi-sensory theater experience, features music on Elizabethan instruments still extant from Shakespeare's own production, resulting in lyrical textual passages, overflowing with exotic images, tantalizing sounds, and a palpable lushness.

"Yuri Rasovsky, who wrote and produced this superior experience, must be a genius." ( AudioFile)

Good speakers, great plays - however I found it difficult. Why? It is not so clear where a piece starts and ends. The plays are spoken quite quick, there is no music inbetween the single plays. Also some introduction to each play would be nice but is not there. 3 points from me.