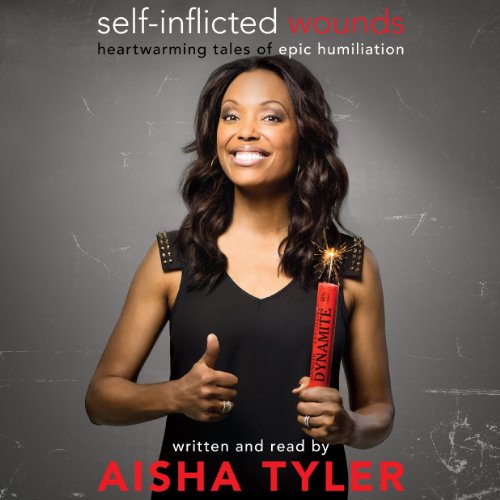 self-inflicted wound (n): a spectacularly humiliating, and often hilarious, incident entirely of one's own making. see also: you did it to yourself.

Have you ever made a decision you instantly regretted? Humiliated yourself in a room of your peers, or shamed yourself in front of your massive crush? Ever blown a job interview, frozen during a presentation, acted like a total idiot on a date? Ever said the wrong thing at the wrong time, unable to keep your tongue from flapping out the stupidest words you've ever said in your life, ever? If you are a human being, the answer, of course, is yes. Take heart. You're not alone. This is known as the self-inflicted wound, and every one of us bears a scar. Or several.

Here, Aisha Tyler, comedian, actress, cohost of CBS's The Talk, star of Archer, and creator of the top-ranked podcast Girl on Guy, serves up a spectacular collection of her own self-inflicted wounds. From almost setting herself on fire, to vomiting on a boy she liked, to getting drunk and sleeping through the SATs, to going into crushing debt to pay for college and then throwing away her degree to become a comedian, Aisha's life has been a series of spectacularly epic fails. And she's got the scars to prove it. Literally.

Through it all, Aisha's triumphs haven't come in spite of the failures, but because of them. Because with every failure comes a lesson learned, a strength revealed, a fear overcome, or an adventure braved. Self-Inflicted Wounds isn't just about surviving failure. It's about embracing failure - pursuing it, even - on the winding path to success. And after you've failed a time or three, hopefully you'll have learned something. Or at the very least have a really killer story. Because to err is human, but to fail epically is hilarious.

This Audio Book is full of funny and interesting stories. I liked the voice of the author a lot.