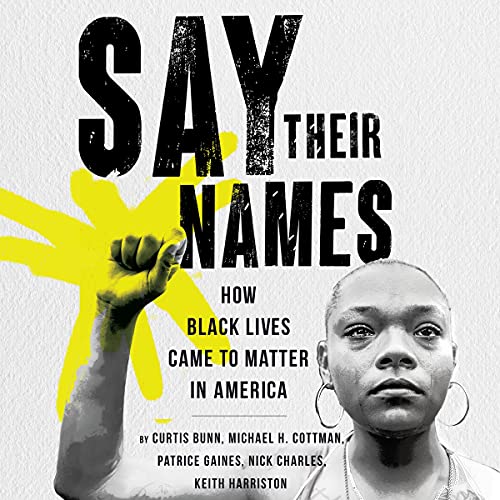 An incisive, gripping exploration of the forces that pushed our unjust system to its breaking point after the death of George Floyd and a definitive guide to America's present-day racial reckoning.

For many, the story of the weeks of protests in the summer of 2020 began with the horrific nine minutes and 29 seconds when Police Officer Derek Chauvin killed George Floyd on camera, and it ended with the sweeping federal, state, and intrapersonal changes that followed. It is a simple story, wherein White America finally witnessed enough brutality to move their collective consciousness. The only problem is that it isn't true. George Floyd was not the first Black man to be killed by police - he wasn’t even the first to inspire nation-wide protests - yet his death came at a time when America was already at a tipping point.

In Say Their Names, five seasoned journalists probe this critical shift. With a piercing examination of how inequality has been propagated throughout history, from Black imprisonment and the Convict Leasing program to long-standing predatory medical practices to over-policing, the authors highlight the disparities that have long characterized the dangers of being Black in America. They examine the many moderate attempts to counteract these inequalities, from the modern civil rights movement to Ferguson, and how the killings of George Floyd, Breonna Taylor, and others pushed compliance with an unjust system to its breaking point. Finally, they outline the momentous changes that have resulted from this movement, while at the same time proposing necessary next steps to move forward.

With a combination of penetrating, focused journalism and affecting personal insight, the authors bring together their collective years of reporting, creating a cohesive and comprehensive understanding of racial inequality in America.

“Say Their Names is essential reading for anyone who wants to understand where we are in America’s long struggle with racism and White supremacy - and how we got here. Five award-winning journalists give us the best, most comprehensive portrait to date of the Black Lives Matter moment that was ignited by the murder of George Floyd. They give us historical perspective, intimate portraits, fact-filled examination of the issues that face Black communities across the country and a sure sense of the way forward. It is not the 'first rough draft of history', but rather a polished assessment of recent history that will stand the test of time.” (Eugene Robinson, Pulitzer Prize-winning Washington Post columnist and MSNBC analyst)

“To read Say Their Names is a journey into the collective and immediate consciousness of Black Lives Matter. The book skirts across the authors’ memory and reader’s current perspectives on race and what we know of America. In this book, Patrice Gaines, Curtis Bunn, Nick Charles, Michael H. Cottman, and Keith Harriston are speaking to the current moment and the long civil rights movement. It is here, in the angst of these moments and the awareness of our collective past that we can predict our interconnected futures." (DaMaris B. Hill, author of A Bound Woman Is a Dangerous Thing)

“This book tracks the fascinating evolution of one of the world's most powerful movements and highlights the crushing racism that has made that movement so utterly necessary. Say Their Names is a timely, deeply engaging read." (Nathan McCall, New York Times best-selling author of Makes Me Wanna Holler: A Young Black Man in America)