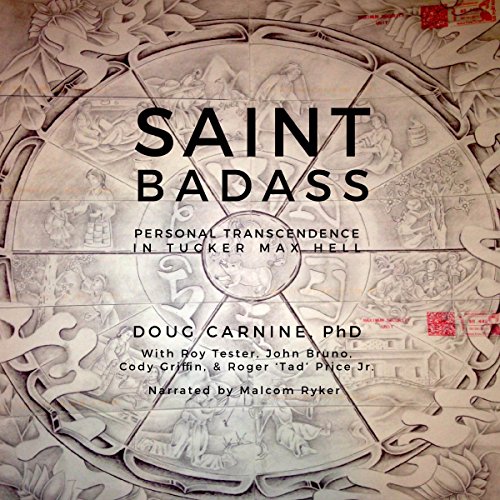 "My life was the result of my crazy childhood."

With these words began an extraordinary correspondence between Roy Tester, a double-murderer serving a life sentence in the notorious Arkansas prison, Tucker Maximum Security Prison, and Doug Carnine, a meditation teacher and lay Buddhist minister on the other side of the country. In the letters that followed - more than 700 over seven years - these two men, along with three other prisoners at Tucker Max, developed a profound spiritual partnership that changed all of their lives.

Saint Badass: Personal Transcendence in Tucker Max Hell tells the inspiring story of these unlikely friends in their own words and follows their journey as they rediscover their humanity in one of the most inhuman places on Earth.

Saint Badass: Personal Transcendence in Tucker Max Hell is a memoir about bringing heaven down to hell. Drawing on an exchange of letters, Doug Carnine tells the story of his partnership with three murderers and an alleged rapist, about Buddhism and its practices of mindfulness and kindness, and how by adopting these practices, the prisoners transformed their lives.

All four prisoners were housed in Tucker, Arkansas, at the notorious maximum-security prison featured in the Robert Redford movie, Brubaker. In their letters to Carnine, and sometimes to one another, the prisoners describe their unrelentingly abusive childhoods, their lives of violence and crime, their eventual submission to prison life, and their growing commitments to meditation and kindness. A suspenseful and moving drama unfolds as these prisoners join in partnership and experience glimpses of internal freedom.

Each prisoner faces new crises in prison, including disabling illness, a brain tumor, a prison gang attack, family betrayal, medical abuse, and harsh punishments for mild offenses. Yet, through mindfulness and the blessings of kindness, each prisoner in his own way overcomes his crisis. The destructive forces of prison and the horror of the men's upbringings provide a dramatic contrast to their incongruously continuous acts of kindness and growing concern for the well-being of others.

The journey chronicled in this audiobook calls into question stereotypes about marginalized members of society and inspires hope for change. This story is about transformation - that of the prisoners, and of the author, as he shares personal difficulties and learns from the courage and commitment of his prison friends.