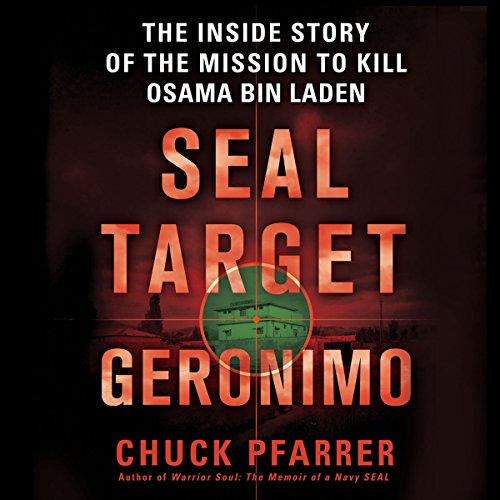 On May 2, 2011, at 1:03 a.m. in Pakistan, a satellite uplink was sent from the town of Abbottabad, crackling into the situation room of the White House in Washington, D.C.: "Geronimo, Echo, KIA." These words, spoken by a Navy SEAL, put paid to Osama bin Laden’s three-decade-long career of terror.

SEAL Target Geronimo is the story of Bin Laden’s relentless hunters and how they took down the terrorist mastermind, told by Chuck Pfarrer, a former assault element commander of SEAL Team Six and author of the best-selling Warrior Soul: The Memoir of a Navy SEAL. After talking to members of the SEAL team involved in the raid, Pfarrer shares never-before-revealed details of the historic raid and the men who planned and conducted it in an exclusive boots-on-the-ground account of what happened during each minute of the mission - both inside the building and outside. Pfarrer takes readers inside the operation as the SEALs flew over the wall of Bin Laden’s shabby, litter-strewn compound and then penetrated deeper and deeper into the terrorist’s lair, telling us just what it looked, sounded, and smelled like in that sweltering Pakistani suburb. He takes us out to the courtyard to witness the near-disaster of the malfunctioning helicopter and brings us to the exact spot where the al-Qaeda leader was cowering when the bullet entered his head. SEAL Target Geronimo is an explosive story of unparalleled valor, clockwork military precision, and deadly accuracy, carried out by the most elite fighting force in the world: the U.S. Navy’s SEAL Team Six.