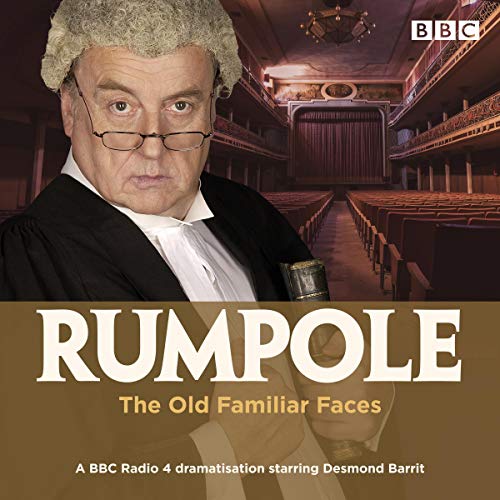 Rumpole and the Old Familiar Faces

Rumpole has no special objection to Christmas - except that with the Old Bailey closed, he has no opportunity to exercise his skills in court. But over the course of one unusual holiday, he nonetheless manages to triumph in two very different cases....

Dragooned into spending Christmas in Norfolk, at the home of one of Hilda’s old school friends, Rumpole is feeling less than festive. Chilly Coldsands Rectory does not offer much in the way of enjoyment - but a trip to the local church and a surprise encounter with an old acquaintance leads to a God-given opportunity to indulge in a little seasonal, charitable blackmail.

A New Year outing to see Aladdin also provides more excitement than expected. The traditional British pantomime is one of Rumpole’s favourite institutions, but he has a vague feeling that there’s something odd about this particular production. A post-panto drink, some overheard remarks and a glance at the programme confirm his suspicions - and put him on the path to solving an audacious crime....

Starring Desmond Barrit as Rumpole and Joanna David as Hilda, with Tim McInnerny as Donald Compton and Nigel Anthony as Fred Timson.