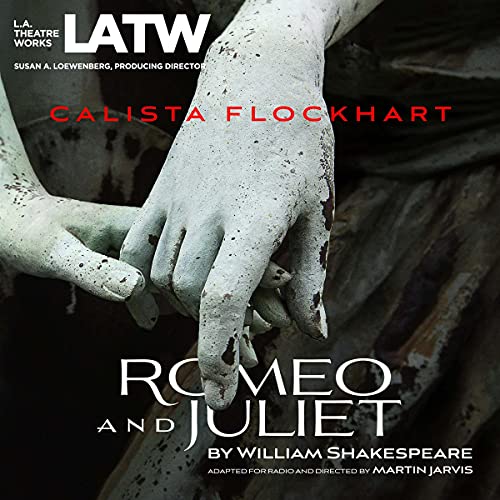 The most iconic love story of all time, Shakespeare's Romeo and Juliet is an epic-scale tragedy of desire and revenge. Despite the bitter rivalry that exists between their families, Romeo Montague and Juliet Capulet have fallen madly in love. But when the long-running rivalry boils over into murder, the young couple must embark on a dangerous and deadly mission to preserve their love at any cost.

An L.A. Theatre Works full-cast performance featuring Calista Flockhart as Juliet; Matthew Wolf as Romeo; Julie White as Nurse; Alan Mandell as Friar Laurence; Richard Chamberlain as Prince Escalus; Nicholas Hormann as Lord Capulet; Josh Stamberg as Mercutio; Mark J. Sullivan as Benvolio and others; Logan Fahey as Tybalt and Balthasar; Alfred Molina as Chorus; Henry Clarke as Paris and others; Lily Knight as Lady Capulet; Janine Barris as Young Lady, Boy Page to Paris and others; Darren Richardson as Sampson and Peter; Alan Shearman as Lord Montague and others; André Sogliuzzo as Gregory and others; and Sarah Zimmerman as Lady Montague and others. Directed by Martin Jarvis. Recorded at the Invisible Studios, West Hollywood in January, 2012.

The book feels more like listening to a movie and not to a written text. It was easy to listen to and kept me entertained from start to finish.