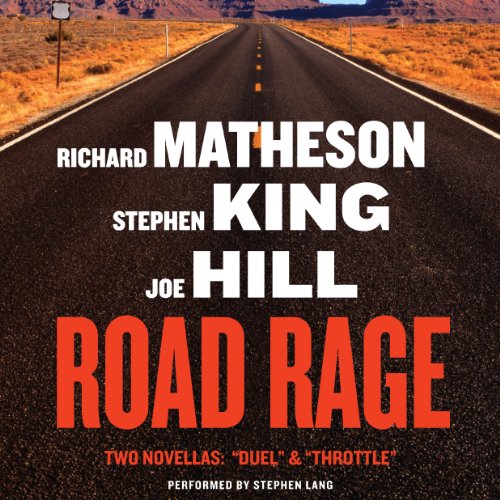 This collection features Richard Matheson's story, "The Duel," and the first collaboration between Stephen King and Joe Hill, "Throttle," a tribute to Matheson. Both stories follow the desperate fortunes of characters who are targeted by anyone's highway nightmare - a crazy truck driver hell-bent on revenge. Stephen Lang narrates with an intensity faithful to the stories' mood. When the grille of the eighteen-wheeler fills the characters' rearview mirrors, he's breathless and angry. When the truck driver backs off, Lang brings across the characters' hope for an unlikely resolution to the madness. By the end of their ordeal, even these gritty road warriors seem sympathetic.

Road Rage unites Richard Matheson's classic Duel and the contemporary work it inspired...two power-packed short stories by three of the genre's most acclaimed authors. Duel, an unforgettable tale about a driver menaced by a semi truck, was the source for Stephen Spielberg's acclaimed first film of the same name. Throttle, by Stephen King and Joe Hill, is a duel of a different kind, pitting a faceless trucker against a tribe of motorcycle outlaws, in the simmering Nevada desert. Their battle is fought out on 20 miles of the most lonely road in the country, a place where the only thing worse than not knowing what you're up against is slowing down.
©2009 Joe Hill, Stephen King, and Richard Matheson (P)2009 HarperCollins Publishers