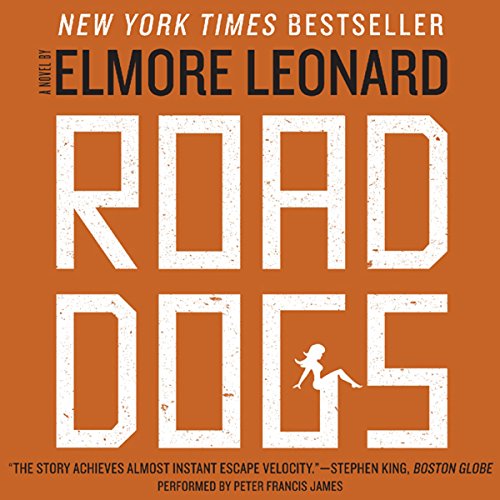 Legendary New York Times best-selling author Elmore Leonard returns with three of his favorite characters: Jack Foley from Out of Sight, Cundo Rey from Labrava, and Dawn Navarro from Riding the Rap.

Jack Foley is serving a 30-year sentence in a Miami penitentiary, but he's made an unlikely friend on the inside who just might be able to do something about that. Fellow inmate Cundo Rey, an extremely wealthy Cuban criminal, arranges for Foley's sentence to be reduced from 30 years to three months, and when Jack is released just two weeks ahead of Cundo, he agrees to wait for him in Venice Beach, California.

Also waiting for Cundo is his common-law wife, Dawn Navarro, a professional psychic with a slightly ulterior motive for staying with Cundo: she wants his money. And with the arrival of Jack, she sees the perfect partner in a plan to relieve Cundo of his fortune. Cundo may be Jack's friend, but does that mean he can trust him? And can either of them trust Dawn?

Road Dogs is Elmore Leonard at his best and readers will love seeing Cundo, Jack, and Dawn back in action and working together . . . or are they?

Biting wit and funny banter are Leonard's strength and there is enough of that in this book, but it is not enough to make it one of his outstanding ones. Even Peter Francis James with his excellent performance and great voice cannot change that. The story is a little bit too close to "Get Shorty", the plot feels a little bit forced and most of the banter and dialogue is funny enough, but lacks the sting, which makes some of his books so great.

Yes, it is nice to meet Jack Foley, Cundo Rey and Dawn Navarro again, but somehow I liked them better in their first appearance. Jack, the notorious bank robber champion and Cundo, the rich crooked Cuban midget become friends, while they are doing time in a Florida prison, they become "road dogs". Jack's reputation allows him to protect Kundo from all kinds of unfriendly attention by his prison mates and in return Kundo spends some money on a smart lawyer to work on an earlier release from prison for Jack. In no time at all Jack is a free man and lives in a nice house in LA with a prepaid credit card and his only obligation is to keep an eye on Dawn, Cundo's wife. This is not as easy as it sounds. Dawn is highly attractive and a free spirit and her wily nature in combination with Jack's weakness for women make it very difficult to limit their relationship to mere surveillance. Things get more complicated yet, when Lou Adams, a slightly obsessed FBI agent, hefts himself on Jack's tail to wait for the next bank robbery and the murderously jealous Cundo announces his imminent release from jail.

The consecutive mayhem is entertaining enough and the characters are as bizarre and wacky as usual, but regardless of that, the novel does not hit you right between the eyes, like some of his best ones do.