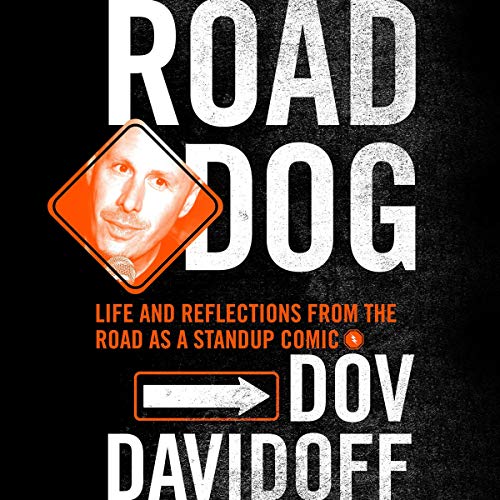 Road Dog is comedian, actor, and writer, Dov Davidoff's unflinching memoir told through reflections of twelve months on the road. Davidoff travels across the country from college campuses to local theaters doing stand-up comedy and telling it like it is. He's been known to wax poetic about everything from encounters with large fake breasts, to people who have too many kids, to magnum condoms the size of CD cases. He is hilarious and relatable and will have you laughing at yourself in no time.

But there's more to the road dog life than TV features and sold out comedy shows, there's a dark underbelly and Dov knows it well. His memoir chronicles the highs and often very low lows of performance life with honesty, clarity, and humility. Dov takes listeners from his fractured childhood days spent in a New Jersey junkyard with a gruff Jewish father and commune-loving hippie Protestant mother to the intense hyperactive persona that his fans know and expect discussing the relationships, drugs, and demons that he has fought along the way. With an eye for self-reflection, and a penchant for hilarious irony, Dov pulls back the curtain on a life hard-made on the road.

Honest and funny. One of the good ones.

Read engagingly by the author, this book is honest, funny and even contains tempered wisdom.