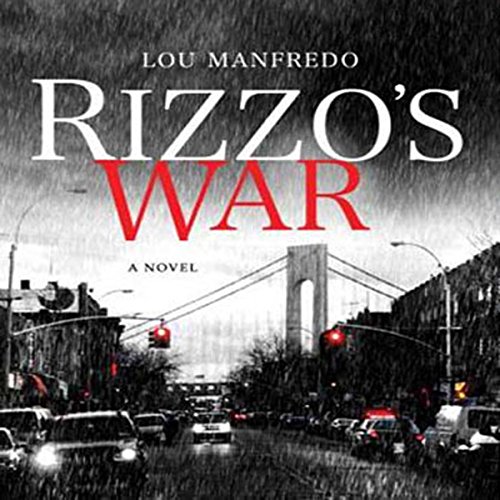 Rizzo's War, Lou Manfredo's stunningly authentic debut, partners a rookie detective with a seasoned veteran on his way to retirement in Bensonhurst, Brooklyn.

"There's no wrong, there's no right, there just is." This is the refrain of Joe Rizzo, a decades-long veteran of the NYPD, as he passes on the knowledge of his years of experience to his ambitious new partner, Mike McQueen, over a year of riding together as detectives in the 62nd Precinct in Bensonhurst, Brooklyn.

McQueen is fresh from the beat in Manhattan, and Bensonhurst might as well be China for how different it is. They work on several cases, some big, some small, but the lesson is always the same. Whether it's a simple robbery or an attempted assault, Rizzo's saying always seems to bear out.

When the two detectives are given the delicate task of finding and returning the runaway daughter of a city councilman, who may or may not be more interested in something his daughter has taken with her than in her safety, the situation is much more complex. By the end of Rizzo and McQueen's year together, however, McQueen is not surprised to discover that even in those more complicated cases, Rizzo is still right - there's no wrong, there's no right, there just is.

Rizzo's War is an introduction to a wonderful new voice in crime fiction in the Big Apple, ringing with authenticity, full of personality, and taut with the suspense of real, everyday life in the big city.

"Lou Manfredo gets it. As a depiction of the Byzantine, politicized existence of a working American police department, Rizzo's War stands as a valuable primer. This is good police work as it actually occurs - full of flaw and compromise, absent the pristine science of television procedurals, and bearing only a vague resemblance to what any social or legal philosopher might define as justice. With all of that said, though, sometimes good police work is nearly enough." (David Simon, creator of The Wire)