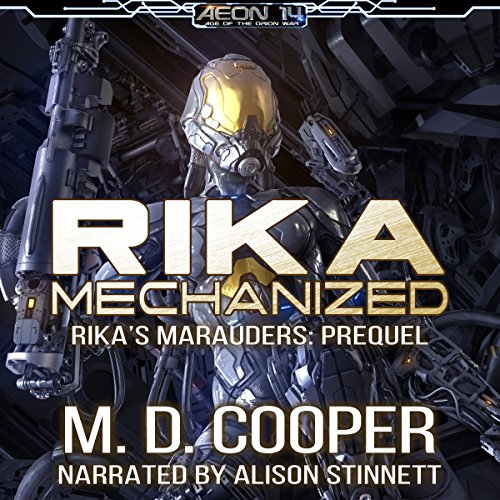 Rika is a scout mech. Once human, now she is the property of the Genevian military.

Rika's crime was small, stealing food. But when faced with a five-year prison term, or conscription in the Genevian military, she chose war.

She had no idea what that conscription would entail.

Now little of Rika's human body remains, and she serves as an SMI-2 scout mech, the meat inside a cyborg body. She, and others like her, are sent in ahead of the human soldiers to tip the scales of war.

But the enemy has upped the ante and the mechs of Rika's fireteam will have to go up against unimaginable odds if they want to serve their time and become human again.

The events of the Rika's Marauders series occur during the New Canaan timespan in The Orion War series. This series may be read at any time after reading Destiny Lost, New Canaan, or Orion Rising.

M. D. Cooper is a New York Times best-selling author who has envisioned a rich future for humanity, one where planet-sized megastructures house trillions of humans, and civilization has risen only to fall and rise again.

Fans of Starship Troopers, Honor Harrington, The Expanse, or Elizabeth Moon's Vatta's War will feel right at home in this, the first book of the Rika's Marauders, which takes a deeper dive into the world of Aeon 14.

Over the course of the next few years, M. D. Cooper plans to release an additional 22 books in this expanding universe. So strap in with Rika and get ready to kick some ass as we find out what the future has in store for us.

One star is too much for my taste.

I made a mistake and bought this audiobook. The content is just not my style of story. The reader is OK but had to "fight" (in my opinion) bad content and therefor had no chance to make something out of this. Stopped listeing after a few chapters.