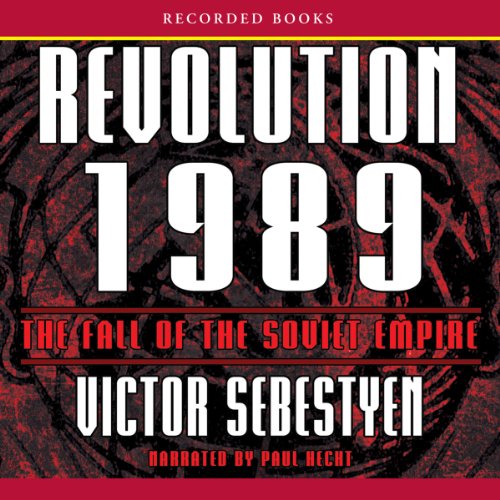 If it were fiction nobody would believe it. Real life events just don’t happen in such dramatic and thematic sync, right? A succession of aged, feeble, and sclerotic Soviet leaders  General Secretaries Leonid Brezhnev, Yuri Andropov, and Konstantin Chernenko  become embodiments of the total moral rot that was the Soviet Union. The next in line, Mikhail Gorbachev, believed in communism and, unlike almost all of his colleagues, admired Lenin. Who would have thought that a man with such beliefs would introduce glasnost (openness), and perestroika (restructuring), and that he would be serious about it? That he would insist upon the unthinkable: that the Soviet satellite states independently make their own political decisions? The Soviet Union was ideologically, militarily, and fiscally bankrupt, and in cutting loose the satellite states, Gorbachev believed these states would choose communism. Victor Sebestyen’s Revolution 1989: The Fall of the Soviet Empire chronicles the transformation of the Soviet leadership under Gorbachev and the revolutions in the six nations of the Warsaw Pact  East Germany, Poland, Czechoslovakia, Hungary, Romania, and Bulgaria  that toppled the old guards of the Soviet Union and altered the course of history.

Sebestyen had access to the Soviet archives, and the finely detailed narrative renderings that pervade Revolution 1989 indicate the archives were extensively used. Paul Hecht, with his rich baseline baritone voice, his precise dramatic control, his evocative vocal cadences and inflections, and careful detailing of characters and events, is the perfect narrator for this book. At 18 hours, 40 minutes in length, the narrative is presented both chronologically and by shifts to and from the six Warsaw Pact states and Soviet Russia. The narrative architecture of the Soviet Union’s deconstruction is a complex and involved and exhilarating story. For this listener and reviewer, the effect of dynamic events of such scale and on all fronts produced a stark, dramatic, and fluid rendering of visual images. Without Hecht’s superb narration I doubt this visual enhancement would have been present in the audiobook. Revolution 1989 is a richly compelling, historically important, and very exciting listen. David Chasey

Revolution 1989 by British journalist Victor Sebestyen is a comprehensive and revealing account of those dizzying days that toppled Soviet tyranny and changed the World. For more than 40 years, communism held eight European nations in its iron fist. Yet by the end of 1989, all of these nations had thrown off communism, declared independence, and embarked on the road to democracy.
©2009 Victor Sebestyen (P)2009 Recorded Books, LLC