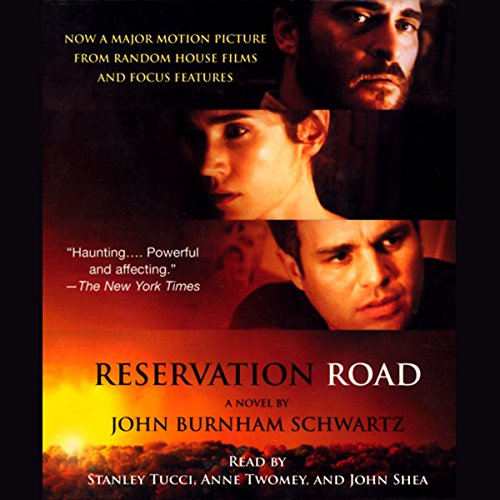 A riveting novel of feeling and suspense in which grief and punishment become tragically intertwined.

At the close of a beautiful summer day near the quiet Connecticut town where they live, the Learner family, Ethan and Grace, their children, Josh and Emma, stop at a gas station on their way home from a concert. Josh Learner, lost in a 10-year-old's private world, is standing at the edge of the road when a car comes racing around the bend. He is hit and instantly killed. The car speeds away.

From this moment forward, Reservation Road becomes a harrowing countdown to the confrontation between two very different men. The hit-and-run driver is a small-town lawyer named Dwight Arno, a man in desperate need of a second chance. Dwight is also the father of a 10-year-old boy, who was asleep in the car the night Josh Learner was killed. Now Dwight must decide whether to run from his crime or to pay the price for what he did. Ethan Learner, a respected professor of literature at a small New England college, has seen his orderly world shattered in a single moment, yet persists in the belief that he can find the unknown man who killed his son. Behind their stories are those of 8-year-old Emma, who can't stop thinking her brother's death was her fault, and of Grace, who must find the strength to keep herself and her family together, and to be the mother Emma so badly needs.

In a gripping narrative woven from the voices of Ethan, Dwight, and Grace, Reservation Road tells the story of two ordinary families facing an extraordinary crisis; an audiobook that sounds like a thriller but opens up a world rich with psychological nuance and emotional wisdom. Reservation Road explores the terrain of grief even as it astonishes with unexpected redemption: powerful and wrenching and impossible to put down.

"Schwartz's haunting tale, overflowing with thinly veiled lessons in life, is nothing short of captivating." ( Booklist)
"A triumph of form, pacing and power...character-driven as it is, it reads like a thriller, swift and complete." ( New York Times)
"Narrating quietly and close to the mike, the readers provide more dimensionality for their roles than the writer has. In short, this is an example of a production that improves upon the book." ( AudioFile)