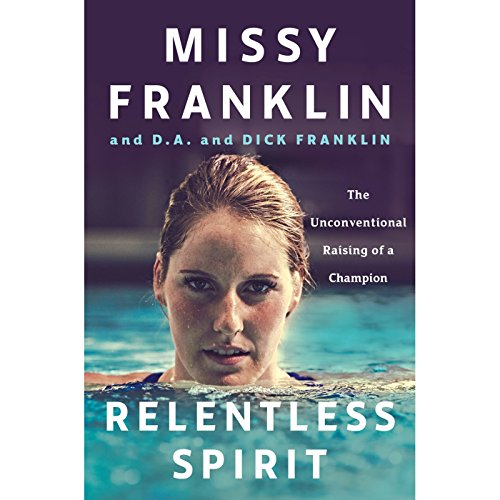 What does it take to become a champion? Gold medalist Missy Franklin, along with her parents, D.A. and Dick, tell the inspirational and heartwarming story of how Missy became both a legendary athlete and a happy and confident woman, something they accomplished by doing things their own way and making the right choices for their family.

The word relentless has many meanings for swimmer Missy Franklin. In the pool, it reminds her to remain steady and persistent, unyielding in intensity and strength. In life, it tells her to reach down for her very best, even when it feels like there's nothing left. The motto "don't quit" doesn't do it for Missy, but relentless gets her where she needs to be. And when Missy faces a challenge or a setback, her relentless spirit is what empowers her to learn, adapt, and move forward into the future.

In Relentless Spirit, Missy and her parents, D.A. and Dick Franklin, share the story of how Missy became the athlete she is today, a six-time Olympic medalist, five of them gold. Since her Olympic debut in London's 2012 games - when Missy was just 17 - people who have met the Franklins or seen them on TV have wondered what it was like to raise such a champion. What was the training like? How did Missy handle school? How did the family find the right facilities, coaches, and support network?

The story that Missy, and her parents, share inside is both inspiring and heartwarming, explaining how she became both a legendary athlete and a happy and confident woman, something they accomplished by doing things their own way and making the right choices for their family, which includes Missy's faith journey, something she writes about with inspirational candor.

Including the highs, the tough moments, and everything in-between, Relentless Spirit tells the story of a woman - and a family - full of love, heart, faith, and resilience.