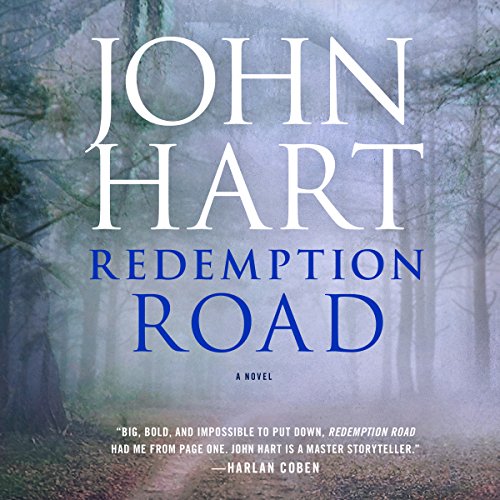 The first and only author to win back-to-back Edgars for Best Novel. Every book a New York Times best seller.

After five years, John Hart is back. Since his debut best seller, The King of Lies, reviewers across the country have heaped praise on John Hart, comparing his writing to that of Pat Conroy, Cormac McCarthy, and Scott Turow. Each novel has taken Hart higher on the New York Times best-seller list as his masterful writing and assured evocation of place have won readers around the world and earned history's only consecutive Edgar Awards for Best Novel with Down River and The Last Child. Now, Hart delivers his most powerful story yet.

Imagine: A boy with a gun waits for the man who killed his mother.

A troubled detective confronts her past in the aftermath of a brutal shooting.

After 13 years in prison, a good cop walks free as deep in the forest, on the altar of an abandoned church, a body cools in pale linen....

This is a town on the brink. This is Redemption Road.

Brimming with tension, secrets, and betrayal, Redemption Road proves again that John Hart is a master of the literary thriller.

too slow and too predictable

It's an OK story read well. Yet only worth 3 stars to me because the characters are all just so incredibly gloomy. Set in a town full of bullies, crooks, victims, and tortured heroes.

The old lawyer, Crybaby Jones, is the only one to bring a little pizzazz to the cast but he's just a minor character,and can't supply enough comic relief.

To me, this story aims to land somewhere between Joyce Carol Oates and Michael Connelly. Alas, it's too uninspired for Gothic and too predictable for a detective story (by the final third of the story you know who the killer is - and it's who you've been suspecting during the entire middle. Not cool).

What an incredible storyteller!

A 14-year-old boy out to avenge the death of his mother.
An 18-year-old girl freed after having being held captive and sexually abused for days.
A female police officer under investigation for killing two men.
An ex-police officer released after having served thirteen years for murdering a woman.
John Hart links these characters (and others) and their sad back stories and creates a multi-layered gritty and dark Southern mystery that was absolutely riveting. With bad guys that were truly bad and beyond redemption, and full of memorable and complex characters that were damaged by past events, Redemption Road turned into a profoundly moving book, which I hadn't expected from this literary thriller. Tension is running high in the small North Carolina town and Hart constructs beautiful sentences and phrases that capture the mood and the emotions perfectly. Powerful writing with vivid imagery.
The narration was ok but could have been better IMHO. There wasn't enough distinction between the characters and the females didn't sound particularly female. However, it had the added bonus of an interesting interview with John Hart talking about the creative process. I really enjoyed that informative little addition.