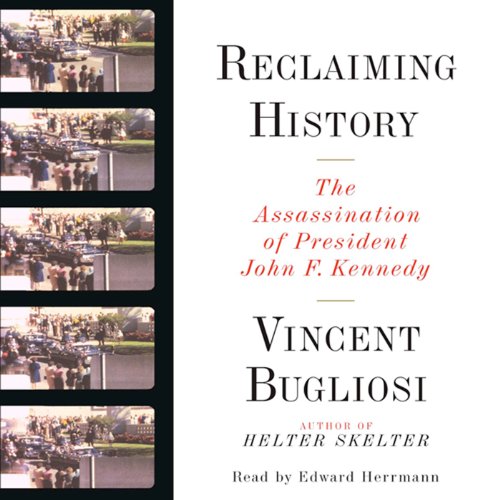 Polls reveal that 85 percent of Americans believe there was a conspiracy behind Lee Harvey Oswald. Some even believe Oswald was entirely innocent. In this encyclopedic, absorbing audiobook, Vincent Bugliosi shows how the public has come to believe such lies about the day that changed the course of history.

Bugliosi has devoted almost 20 years of his life to this project, and is determined to show that, despite the overwhelming popular perception, Oswald killed Kennedy and acted alone.

The brilliant prosecutor of Charles Manson and the man who forged an ironclad case of circumstantial guilt around O. J. Simpson in his best-selling Outrage, Bugliosi is perhaps the only man in America capable of "prosecuting" Oswald for the murder of President Kennedy. Reclaiming History is a narrative compendium of fact, ballistic evidence, reexamination of key witnesses, and common sense. Every detail and nuance is accounted for, every conspiracy theory revealed as a fraud upon the American public.

Bugliosi's irresistible logic, relentless pursuit of the truth, and command of the evidence shed fresh light on this American nightmare, providing a new understanding of what did and did not happen in Dallas on November 22, 1963. At last we know what really happened. At last it all makes sense.

"Vincent Bugliosi is an American master of common sense, a punishing advocate and a curmudgeonly refreshing voice of reason....With this work, Bugliosi has definitively explained the murder that recalibrated modern America. It is a book for the ages." (Los Angeles Times Book Review)

This is probably the most detailed account of the Kennedy assasination. Basically more than half of the boom is dedicated to a minute-by-minute account of the fatal days in November 1963. The second half is then dedicated to all sorts of conspiracy theories, debunking all of them on a one-by-one basis.