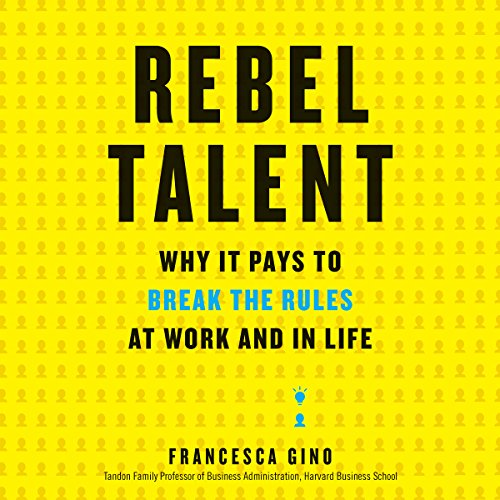 An airline captain who brought his flight to safety in a daring water landing.

A magician known for his sensational escape acts.

A computer scientist who founded a world-renowned animation studio.

What do all of these people have in common? They love their jobs, they break the rules, and the world is better off for it. They are rebels.

From an early age, we are taught to be rule followers, and the pressure to fit in only increases as we age. But conformity comes at a steep price for our careers and personal lives. When we mindlessly accept rules and norms rather than questioning and constructively rebelling against them, we ultimately end up stuck and unfulfilled. As leaders, we are less effective and respected. As employees, we are more likely to be overlooked for top assignments and promotions. As partners and friends, we are checked out and unhappy.

Francesca Gino has been studying rebels in life and in the workplace for more than 15 years. She has discovered that rebels - those who practice "positive deviance" at work - are harder to manage, but they are good for the bottom line: their passion, drive, curiosity, and creativity raise the entire organization to a new level. And she has found that at home, rebels are more engaged partners, parents, and friends.

Packed with strategies for embracing rebellion at work and in life, and illuminating case studies ranging from the world of fine dining to fast food chains to corporations such as Google and Pixar, Rebel Talent encourages all of us to rebel against what’s comfortable, so that we can thrive.

Francesca Gino is an award-winning researcher and teacher and a tenured professor at Harvard Business School. Her consulting and speaking clients include Bacardi, Akamai, Disney, Goldman Sachs, Honeywell, Novartis, P&G, and the US Air Force, Army, and Navy. She has been honored as one of the world's Top 40 Business Professors under 40 and one of the world's 50 most influential management thinkers. Her work has been featured on CNN and NPR as well as in the Economist, Financial Times, New York Times, Newsweek, Scientific American, and Psychology Today.