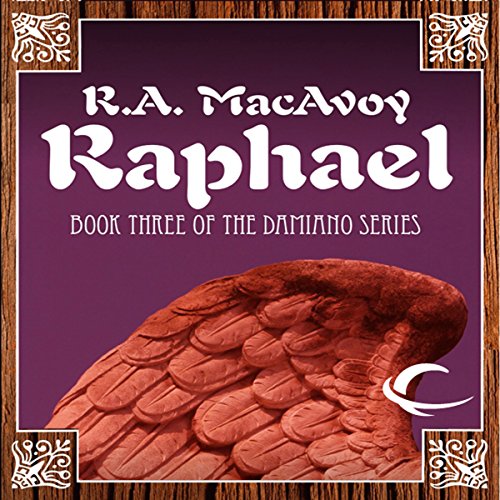 Raphael: Lessons Along a Minor String

The haunting conclusion of a magnificent fantasy trilogy, which began with Damiano and continued with Damiano's Lute. Set against the turbulent backdrop of the Italian Renaissance this alternate history takes place in a world where real faith-based magic exists.

Weakened by his contact with mortals, the Archangel Raphael falls prey to his brother Lucifer, who strips him of his angelic powers. Sold in the Moorish slave markets, confused and humbled by his sudden humanity, Raphael finds his only solace in the friendship of the dark-skinned Berber woman Djoura, and the spiritual guardianship of his former pupil Damiano Delstrego. Accompanied by the rakish Gaspare and an ancient black dragon, Damiano's beloved Saara embarks on a quest to rescue Raphael. Their odyssey leads them to a shattering confrontation with the Father of Lies and a transcendent reckoning with destiny.

Blending humor, pathos, adventure and romance, the two previous volumes in R.A.MacAvoy's trilogy have evoked admiration and praise from writers and readers. Raphael fulfills the promise of the trilogy to forge a magnificent, moving saga you will never forget.