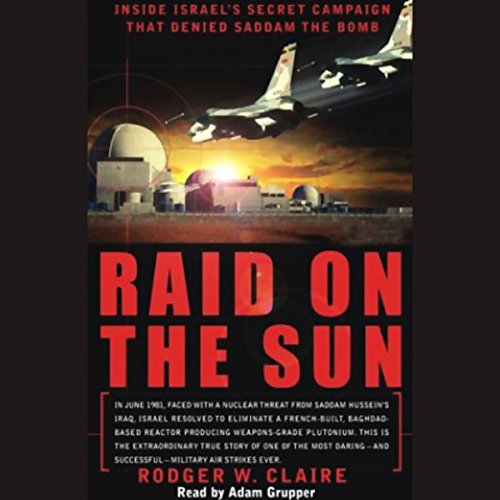 Raid on the Sun

From the earliest days of his dictatorship, Saddam Hussein had vowed to destroy Israel. So, when France sold Iraq a top-of-the-line nuclear reactor in 1975, the Israelis were justifiably concerned. The reactor formed the heart of a huge nuclear plant situated twelve miles from Baghdad, 1,100 kilometers from Tel Aviv. By 1981, the reactor was on the verge of becoming "hot," and Israeli Prime Minister Menachem Begin knew he would have to confront its deadly potential. He turned to Israeli Air Force commander General David Ivry to secretly plan a daring surgical air strike on the reactor, a never-before contemplated mission that would prove to be one of the most remarkable military operations of all time.

Written with the full and exclusive cooperation of the Israeli Air Force high command, General Ivry (ret.), and all of the eight mission pilots (including Ilan Ramon, who became Israel's first astronaut and tragically perished in the shuttle Columbia disaster), Raid On the Sun tells the extraordinary story of how Israel plotted the unthinkable: defying its U.S. and European allies to eliminate Iraq's nuclear threat. In the tradition of Black Hawk Down, journalist Rodger Claire re-creates a gripping tale of personal sacrifice and survival, of young pilots who trained in America on the then-new, radically sophisticated F-16 fighter-bombers, then faced a nearly insurmountable challenge: how to fly the 1,000-plus-kilometer mission to Baghdad and back on one tank of fuel; he recounts Israeli intelligence's incredible "black ops" to sabotage construction on the French reactor and eliminate Iraqi nuclear scientists; and he gives readers a pilot's-eye view of the action on June 7, 1981, when the planes roared off a runway on the Sinai Peninsula for the first successful destruction of a nuclear reactor in history.

"A stunning eye-opener, shocking you with the realization of the enormous service the Israeli Air Force rendered the free world with its 1981 attack on Saddam Hussein's nuclear facility. Claire went right to the source, the Israeli pilots who flew the mission, to tell in colorful detail the full story of this historic strike. (Walter Boyne, author of Operation Iraqi Freedom: What Went Right, What Went Wrong and Why)

This is a detailed account of an interesting episode of atomic history not everyone knows about. It shows that even back in the 70s and 80s Israel went through a lot of effort to prevent its neighbors to get atomic weapons, while they themselves do actually have them. These days things like this are done in the cyber (Stuxnet), but even there Israel considered to bomb Natanz the old school way ... Its surprising to me that such behavior has no real consequences. Just image the outcry and outcome if it was the other way around ...