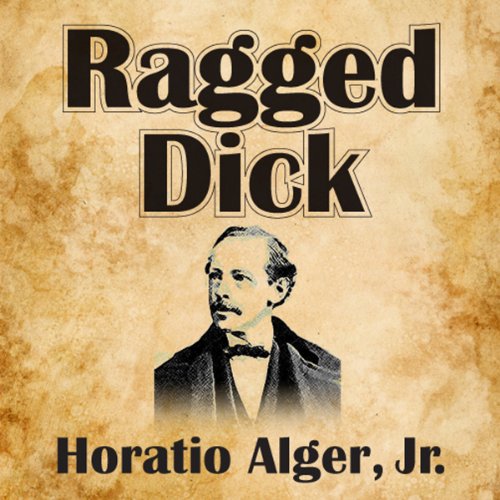 Ragged Dick is the story of a young bootblack living and working in the streets of a post-Civil War New York City. It follows his rise from a street kid to the respectable middle class. The original publication, released as a six volume series, came to depict a time of post-war struggle through the eyes of its young victims, vagabond children. Originally written as young-adult moral tales using the classic rags-to-riches theme, Ragged Dick is also Algers' timeless snapshot into an all but forgotten period in American history, and the ever relevant struggle for economic and social status.

Horatio Alger was born on January 13, 1834 in Chelsea, Massachusettes. Alger began writing in earnest and being a published author at the age of 17. After graduating from Harvard, Alger obtained a position in ministry in a Unitarian Church, but was dismissed on scandalous and incriminating charges. Around 1866, Alger moved to New York, a time that marked the beginning of a very successful writing career. Around this time, the Ragged Dick series was being published as a serial, and in 1868 it was published as a complete novel. In New York City, Alger took a special and personal interest in the street children and became a frequent visitor to their popular haunts. Perhaps this is what gave him a clear insight into their trials and tribulations and aided in creating the simple yet timeless story of Ragged Dick. Eventually, Alger took two street children into his home and informally adopted them.