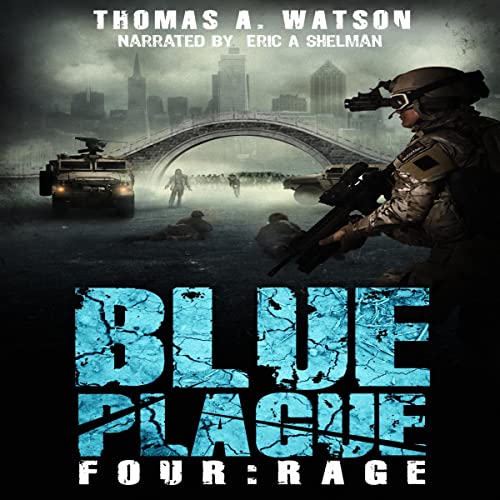 The zombies killed the love of his life. Now he will make the world pay.

Bruce had promised to keep his family safe. Now, in spite of the best armament in the world, battle-hardened allies, and his own brilliant strategy, his greatest love is killed…and it pushes Bruce over the edge. He goes on a killing rampage, destroying blues and marauders alike.

Rage is a bloodbath of violence, grief, and revenge that literally changes the landscape of the post-apocalyptic world as Bruce slaughters the enemies of humanity until he is feared and hated by both.

The odds are impossible. The Infected are smart and fast. They can heal. They can even reproduce. But even the undead cannot hope to stand up to a man so filled with rage he has become a force of nature.

I am going to keep this short. This is the fourth book in the series, so if you have not listened or read book one, make sure you start there, The Series is AMAZING. This is read by Eric A. Shelman, and he did an amazing job on the read, and the characters as well. Recorded perfectly, and it really brings the story, and characters to life. Super nice to listen to. The book is amazing, and Mr. Shelman's production of the audio book brings everything together PERFECTLY. If I could I would give this 10 stars