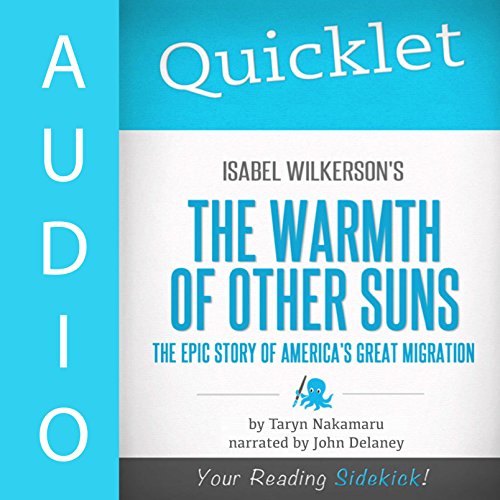 Quicklet on Isabel Wilkerson's the Warmth of Other Suns

Isabel Wilkerson's The Warmth of Other Suns is truly a labor of love. It took 15 years to research and write, as she interviewed over 1,200 people. Wilkerson tracked down her subjects at churches, quilting clubs, funerals, family reunions, and others. After preliminary rounds of interviews, she narrowed her search down to 30 people, and then chose the three main subjects who appear in the book. She was racing against the clock to collect as many stories as possible from the migrants, whose numbers were starting to dwindle. Her book even covers the funerals of both George Starling and Robert Pershing Foster.

In order to write her story in a heartfelt manner, Wilkerson recreated Robert Foster's exhausting drive from Louisiana to California. Dr. Foster drove through three states without rest because blacks weren't welcome at any motels in those regions. Wilkerson's trip was cut short by her parents, who insisted she stop before reaching dangerous levels of fatigue. At a particularly perilous tract of the drive, Wilkerson writes that her mother said, "You know he must have been ready to cry right about here."